Amphitheater of Durrës - Into Albania

The newest ancient arena of the Balkans

The Amphitheater of Durrës remains one of the most majestic of the ancient world and one of ten most beautiful Roman amphitheaters. Widely recognized among enthusiasts of Antiquity, it is a pearl of the Balkans that is slowly making its way out of the shell. Discovered relatively recently, in 1966, its unearthing occurred in a slightly comical way by Vangjel Toçi. Legend has it that Vangjel, an archaeologist and resident of Durrës, happened upon a fig tree which had fallen a few meters below ground level. Curious and inquisitive, he insisted that the area undergo excavations. Rightly so, for underneath was lying the long sought-after Amphitheater.

Built after the 2nd century B.C., this Amphitheater of Durrës endures as one of the greatest Roman constructions in the region and one of the miracles erected under Roman emperor Trajan. To spare you curious readers the jump to Wikipedia, suffice it to say that Trajan is considered to be the second of the Five Good Emperors. With Trajan as the leader of the Empire for 19 years (98-117 A.D.), Rome flourished and, with it, the constructions of that time. A part of the Durrës Amphitheater remains unexcavated, adding a certain flair of charm and mystery, akin to the sculptures “The Winged Victory of Samothrace” in the Louvre or the Torso of Apollo  in the Metropolitan Museum of Art. Thus, though some elements are absent, the Amphitheater’s function throughout the years remains clear to this day.

The arena, the site that saw the spectacles of the gladiators and other events held for the viewing pleasure of Emperor Trajan and spectators, is surrounded by the tiered staircases where approximately 15 000 to 20 000 spectators enjoyed the show. Constructed by the local masters, boasting the arena, tiered stairs, galleries and two maenianums (balcony or theatre boxes, for those of us who are not experts of architecture), at the time the Amphitheater was considered a colossus of ancient architecture. Made of a structure of bricks and stones, the Amphitheater is composed of a two-story façade decorated with arches and colonnades overlooking the city center. Walking under the tunnels in the interior of the Amphitheater will remind you of the scene in “Gladiator,” where Maximus enters the arena amid the chants of the spectators, along with all the emotions that the scene evokes. Should you find yourself in the western part of the Amphitheater, you will be only a few steps away from the Adriatic coast.

As with the Roman Coliseum, the equally entertaining and deathly games, represented the moment of culmination for the Amphitheater of Durrës. Following their termination by Emperor Honorius (393-423 A.D.), around the 4th century, whose power coincided with the beginnings of the fall of the Roman Empire, the ancient arena of the gladiators was turned into a cemetery. During this time, a church was built in the amphitheater, for the religious ceremonies of the Christians of Durrës. Initially, its walls were adorned with beautiful frescoes which were later permanently transformed into mosaic panels of St. Stephen, the martyr of Durrës, as well as other saints: St. Stephen, St. Mary, St. Irin, St. Sophia and St. Gabriel. Thus, it seems that the Amphitheater had the fate of going through its phase of excessive entertainment to that of repentance. But, let me stop here, as a personal guide will be waiting for you inside the Amphitheater with an entertaining commentary on more of the site’s historical background!

After this journey through the centuries, you may choose to talk a walk along the beautiful narrow streets of the old city of Durrës and as the sun sets, relax in one of the many seaside cafes and restaurants. A special experience, as old as it is new, awaits the history, art, architecture, archeology…as well as sea and seafood enthusiast in the city of Durrës. The visit, nowadays less dangerous and cheaper than in Antiquity – as the gladiators are long gone and the entrance fee costs only 3 Euros – remains cultural, entertaining and tasty. 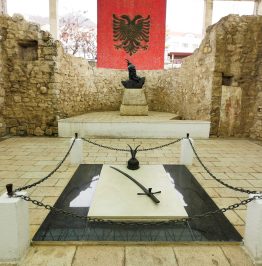 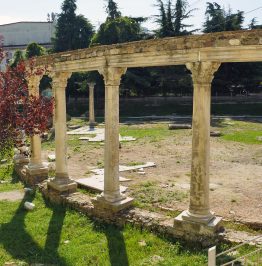