Bridge of Gorica - Into Albania

THE ICONIC MONUMENT OF BERAT

A bridge with a fascinating history, complex architecture, and a beautifully simple aesthetic style, it has drawn admirers across the ages.

Built in the centre of the city of Berat, the grandiose Bridge of Gorica is one of the most beautiful Ottoman bridges in the Balkan region, and connects the city with the neighborhood of the same name. This object owes much of its beauty to its very gradual arch, 10m tall, and elegantly extending 130m over across both sides of the Osumi riverbed. It is composed of a total of seven arches, wooden railings, and several small “windows,” which give the arches whimsical facial features, making this bridge a rare sight indeed. Once spotted, you’ll find it hard not to stop your car by the side of the road in order to admire its beauty close up.

As it is with many of Albania’s most famous monuments, a legend surrounds this structure. This grizzly myth involves a young woman being buried alive inside the bridge, in order to ensure that its foundations stand strong forever. Especially proud of having this famous landmark among them, the locals are happy to give illustrious details as to why this bridge is such a rare work of art! And scholars seem to agree, knowing all too well the historical significance it holds, and also admiring its original design, its simultaneously modern yet traditional architecture. It has possessed an historical appeal for world travelers, who become increasingly attracted to its simple yet complex beauty, usually making records of it in etchings, drawings, and photographs. Indeed, the very first official mention of the Gorica Bridge was recorded on the travel journals of the famed Ottoman chronicler, Evliya Çelebi.

The object was originally built in wood in 1780, by Ahmet Kurt Pasha of Berat, during a time that the two separate communities on each side of the Osum River sought to connect with one another, especially when the neighborhood of Gorica saw a rise in its population. In 1918, by the end of the First World War, it was damaged from several explosions. Fortunately, the bridge was quickly and thoroughly reconstructed in the 1920s, this time in stone, giving it the shape that it holds to this day. Especially for the bridge lovers out there: you simply cannot miss this gem! 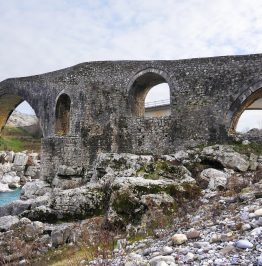