Church of Theth - Into Albania

The Picturesque Landmark of the Northern Village

Situated in the epicenter of the village of Theth, it seems as though the gorgeous mountain ranges and the iconic Theth rooftops revolve around this at once simple and extraordinary church.

The ruins of the old church date back to the year 1892 and it was precisely here, in the same location, that the new church of Theth was erected. As modest as it is striking, this church is inextricably linked to the image and history of the scenic village of northern Albania. Long ago, the first parishioner of the church lived right next to it, in the attached presbytery. Nowadays, however, with the reconstruction of the new church, this sacred place has become home to all the village locals, a mostly Roman-Catholic population.

The history of the church is connected to the names of various Albanian patriots and clerics who served their country and contributed to national culture. Father Shtjefën Gjeçovi, for instance, is one of the heroes behind the cultivation of the Albanian language. Back in 1917, he opened the first Albanian school in this area, a tradition which was highly supported and shared by other clerics and teachers as well as by the post-1921 Albanian government, which quickly followed suit. 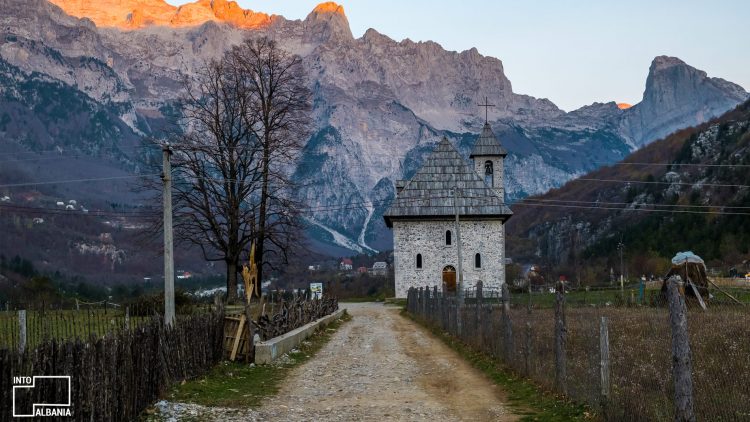 During the Communist dictatorship, the church was closed though fortunately not destroyed, like many other religious structures during the time. Instead, the church assumed another function and served as a civic center where many community services took place. After the 1990s. with the collapse of the Communist regime, Theth’s inhabitants along with their family members, who by now were immigrants in various countries in Europe, financed the reconstruction of the new church.

The new church has assumed a similarly significant and dominating presence as its predecessor.  Perfectly situated on the tranquil valley, this small grey structure warmly welcomes all those who are lucky enough to visit this magical village. The construction reflects the traditional structures of the deep highlands. Resembling a tower, the entire structure rests on a single massive column, with quaint rooftops which reach varying heights, culminating with the grand cross. The back of the church is semicircular with the various roofs enhancing the wonderful architectural harmony of this structure. Though small in size and fairly intimate, the dominating position of this church is unquestionable and worth witnessing live! 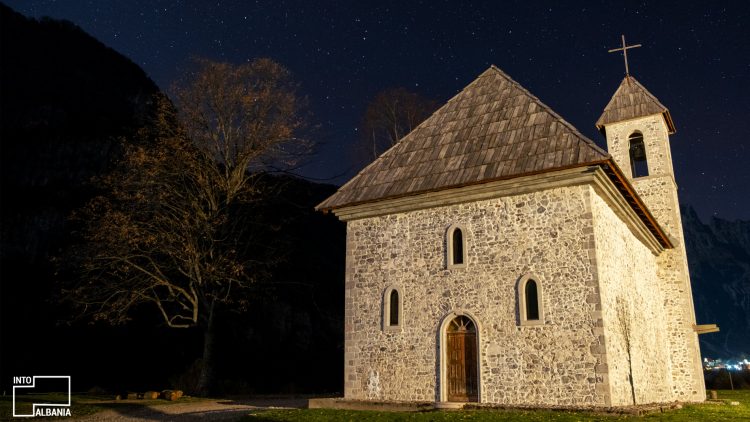 When to see it

The church is particularly breathtaking on early spring and summer mornings. At these moments, the especially bright Theth sunlight turns everything to a shimmering shade of silver, in the middle of which the matching silver-hued church seems to appear as if by magic. In early fall, you may witness the beautiful seasonal shades appear on the foliage of the trees that surround the church as well as on the entire landscape. Winter may be the most magical of them all, although, unfortunately, access to Theth during the coldest months is challenging, if not impossible. Locals will tell you that the image of the snow-covered valley and the sun rays hitting the church of Theth is simply mesmerizing!