A Vertical Cave Unlike Any Other

Entirely unknown to this day but full of potential as an adventure destination, Herons’ Cave (Shpella e Çafkave) was recently discovered by a group of passionate explorers from Kosovo.

Caves are some of the most sought-after attractions by tourists around the world, especially  among outdoor lovers. The Tropoja region is famous for the number and great variety of caves found in it, especially karstic ones created by the erosion of limestone. Among the well-known caves of Tropoja, an extraordinary vertical cave has recently been discovered. With a diameter of 7 meters and depth of 120 meters, the cave’s interior is so vast, it could accomodate a football field! It is called Herons’ Cave and there is nothing like it in the entire country and, perhaps,  even in the greater Balkan region. 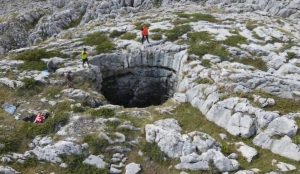 Herons’ Cave is located in Tropoja, between Çerem Valley in the northeast and the left branches of Valbona in the southeast, on a hill called the City of Slabs (Qyteti i Rrasave), over 2060 meters above sea level, between the Snake Peak (Maja e Gjarpërit) (2142 m) and the Isuf Dema Peak (2243 m). The diameter of this cave is 7 meters with a vertical depth of over 120 meters. What is astounding is the space found within its depths, which equals the size of a football field (100 x 50 meters). The cave is very cold with no signs of bats or any of the living creatures usually found in caves.

The explorers near Herons’ Cave. Photo by Gani Halili.

On August 8, 2020, a group of explorers, led by Aziz Kastrati, Blerton Nuhaj (Chairman of the climbing club “Ketrat”), Isa Balaj, Gani Halili and Lorik Bokshi, climbed down Herons’ Cave, into a depth of over 120 meters. An important role was also played by Isuf Adem Doçi, a 70-year-old local shepherd, who joined the group.

The cave was discovered on a mountain hike. It was a local shepherd who led the group toward the mysterious, undiscovered cave, known only by local shepherds. The explorers climbed the peak of City of Slabs, at an altitude of 2060 meters, where they found a large plateau of slabs, hence the name of the area. This is where the cave is located.

The explorers near Herons’ Cave. Photo by Gani Halili.

The group’s descent techniques were fascinating. Their first step was to release ropes of 100 m and 150 m respectively, in order to measure the cave’s depth. The second step was to release a canary (the bird most sensitive to oxygen and gases) into its depths so as to verify the levels of oxygen and potential gases. After the canary stayed in the cave for ten minutes and emerged unscathed, the safety conditions for release were met. The descent into the cave lasted only five minutes while the ascent a full hour. 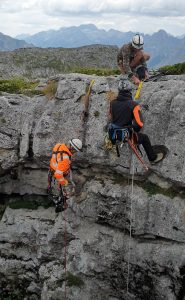 The descent into Herons’ Cave. Photo by Gani Halili.