The perfect place where to "meet" with the famous Albanian writer

A fascinating residential building, which at the time of construction was criticized for a visible Western influence in its cubist style, houses the House Studio Kadare, a space inside Ismail Kadare’s former home that now celebrates the internationally renowned author.

The Famous Albanian author Ismail Kadare’s former house is now open to the public. The space where the writer worked and lived during perhaps the most pivotal moments of his career, from 1974-1990, is located in one of the most popular neighborhoods of the capital. Much of the author’s living quarters have been left as they were so as to give the public a real chance at becoming more familiar with the author. The furniture remains the same as does Kadare’s book collection and numerous other, very telling objects about the life of Is, as his wife Helena refers to her husband in her own memoir. Though the writer has lived in France for the last few decades, his presence is most definitely evoked in this new intimate museum. 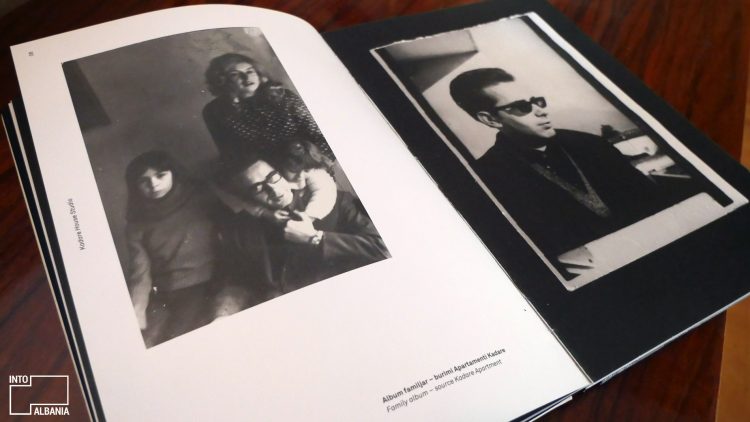 Photo album at the museum, by IntoAlbania.

The most coveted visit by the curious public is that to the author’s private studio, where the countless books that have inspired Kadare are lined up on the white shelves, mounted on the wall by the writer himself. Kadare’s absolute favorite object ion his apartment, the fireplace, sits near the shelves and, right across from it, the writer’s desk with the iconic typewriter Hermes Baby. 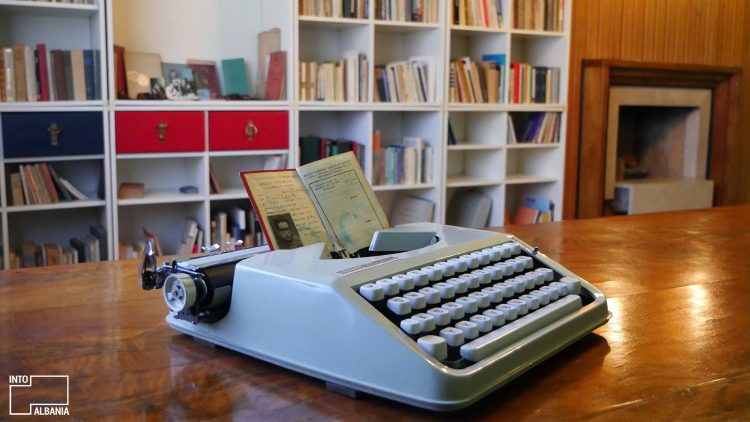 This is the opportune spot to recall Kadare’s multiple memorable characters, created precisely on this desk and who, from this desk, went on to journey the cities of the world and of the writer’s imagination. With our mind’s eye, we can see Mark Alemi as he fixes the last buttons of his coat and, opening the blinds of his studio’s window one last time, he looks at the ominous buildings over the street below.

Another fascinating room is the central salon of the house, complete with the authentic furniture of the time of Kadare’s residence and the numerous other surprises that can be found among its shelves. 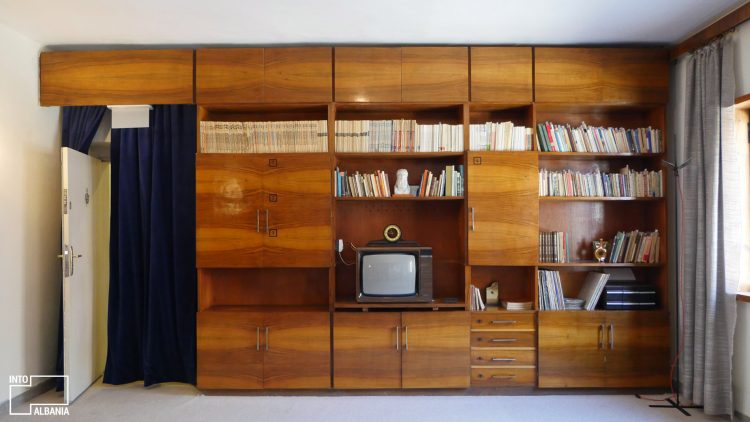 The central salon at House Studio Kadare, photo by IntoAlbania.

Hidden in the many shelf drawers, you will find original and edited manuscripts by the author himself, Kadare’s family photos, his correspondence with other prominent figures of the literary world, and even his personal memoir. 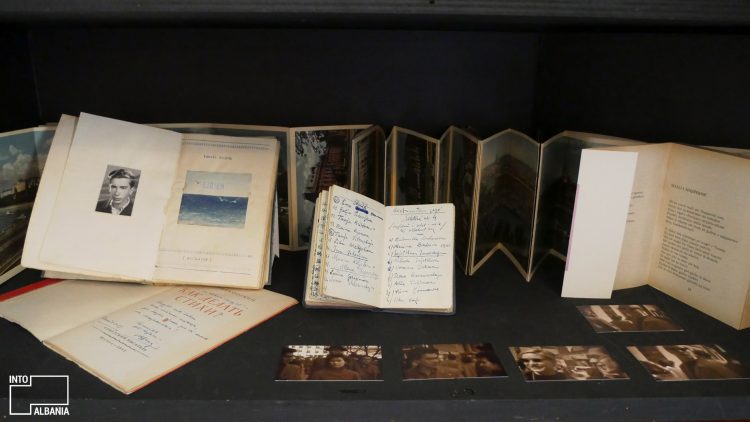 The rest of the rooms of the former apartment now have new functions. For instance, his daughters’ former room has been transformed into an expo of the writer’s many local and international achievements and awards. The first expo is dedicated to the novel that brought him great fame in France, “The General of the Dead Army” which, as the visitor comes to find out, has been translated into 44 languages and adapted to the screen. 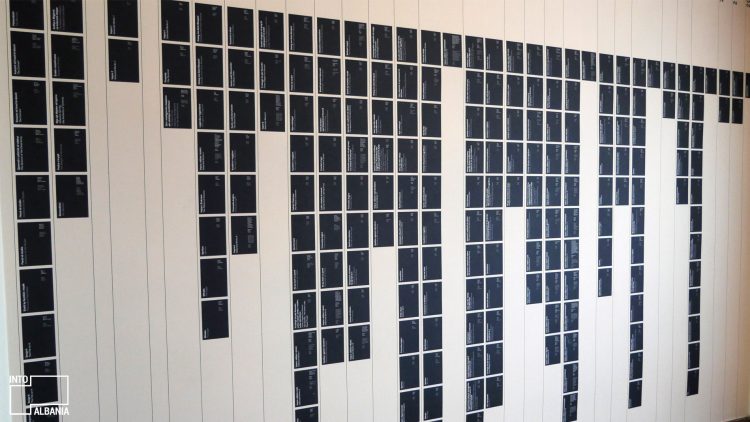 The apartment’s former kitchen exposes the screenplays jointly written by Kadare and his wife, Helena. Last but not least, Kadare’s bedroom has been turned to a study room for scholars of Kadare’s works. Here, they can find perhaps the most accurate information on the writer. 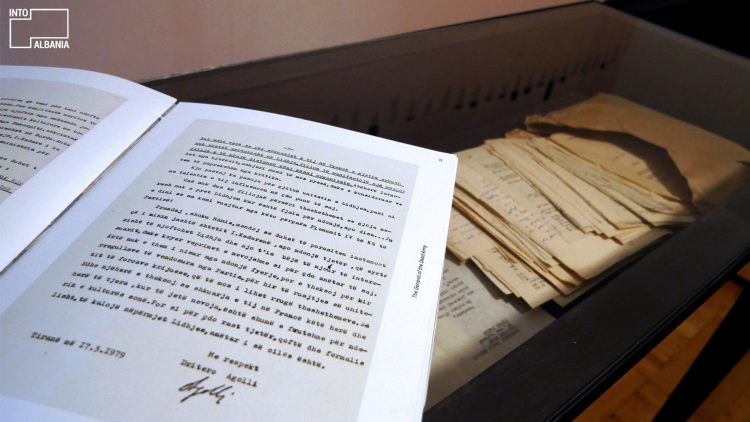 Yet another prominent name of Albania’s literary sphere, Dritëro Agolli, lived only one floor above Kadare in this same building. For those who are interested in the history and architecture of this fascinating building and the general area, the museum’s staff shares a significant amount of information and photographic album of the entire neighborhood as it once was. At the time of its construction, the building designed by architect and artist Maks Velo, was denounced for its cubist forms, the influence of Western art or thought being strictly forbidden during the Communist era. As such, the building became a precursor to Velo’s subsequent unfortunate sentence of ten years of imprisonment. 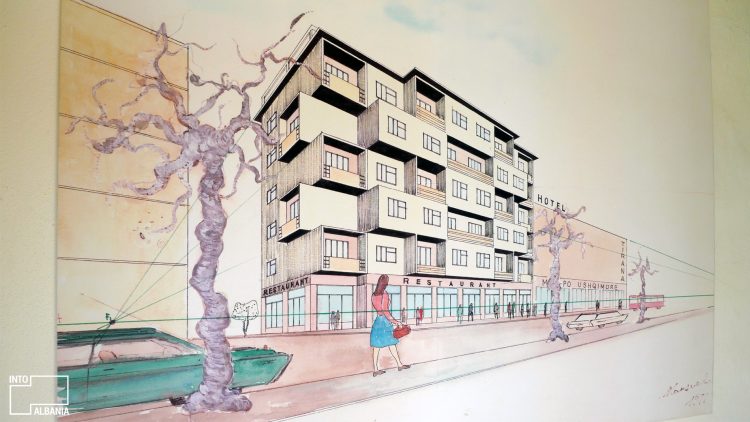 The carefully-designed and curated museum offers one last surprise. Its walls are decorated with many excerpts of the author’s most famous writings. This invites all visitors to play a game of guessing, discussing, and analyzing the author’s words, which all serves to organically accompany them into Kadare’s “kingdom of words”, as he liked to call it.