National Museum of Independence in Vlorë - Into Albania

National Museum of Independence in Vlorë

National Museum of Independence in Vlorë

The Small Yellow House that Changed the History of a Nation

As the building which hosted the operations of the very first Albanian government, the Museum of Independence in Vlorë is strategically positioned in a location that testifies to its significance, near the port, with a beautiful view of the sea. This modest, two-story house is filled with the weight of history! Founded in 1936, this museum is considered to be the first one in Albania before the ’90s. This national museum offers the most comprehensive information regarding the most culminating events in the life of a country. It was in the famous balcony of this bright yellow, traditional house that Ismail Qemali raised the Albanian flag in 1912.

In 1912, at the peak of the crisis in the Balkans, this authentic house gathered delegates from the entire country to signal the new era. The small, impeccably organized space, decorated in 19th century style, is arranged into two main divisions linked by two corridors which join the two separate floors of the house with one another. Open every day of the week with the exception of Monday, the Museum welcomes all visitors in its space, sharing with the public original objects of the time, such as documents of the Renaissance and Independence periods in Albania. Starting from its front yard, the house is enriched with documents from the state archive, sparking curiosity about everyone involved in the great events that took place here.

Bronze busts of the ministers who formed the first government stand visibly in the front yard, along with the copy of the original carriage used by the Father of the Albanian independence, Ismail Qemali. Through its exhibition, the small house reveals the difficult conditions under which Albanian independence was established. Some of the most historically significant objects on display are personal objects belonging to the ministers, several furniture pieces from the office of the Prime Minister, Ismail Qemali, such as his chair and book shelves, the original flags used in battles leading to the declaration of independence, the actual declaration including all the participants’ signatures, iconic photographs which have captured and immortalized the crucial moment as well as paintings of the crucial people and events that left an indelible mark during such a tumultuous time. 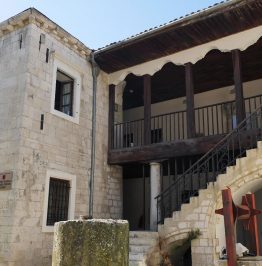