The works of the leading post-Byzantine era national iconographer, who inspired generations of painters to follow in his masterful footsteps, can be found in Berat, Tirana, and Korça, among other places in the country.

The ancient roots of Albanian art testify to the civilizations that have developed in this small Balkan country. In its strategic geographic position, Albania has never been far from artistic movements; on the contrary, each time period has produced great artists who have left their mark on the country’s history and cultural heredity. One such artist is Onufri, a master iconographer who funded a school that produced an entire generation of talented artists (including Onufër Qiprioti and David Selenica).

Onufri’s name is inextricably linked to the cities of Berat and Elbasan, both centers in which he developed his richly colored iconographic art, important both on an individual and religious scale. But, his influence spreads even farther as his icons and frescoes can be found in many other Albanian cities as well as neighboring Macedonia and Greece.

His name graces the National Iconographic Museum in Berat, located in the Dormition of St. Mary Cathedral. The Byzantine church is characterized by an iconostasis that is carved on walnut wood, plated in gold and surrounded by other magnificent objects of medieval art. The museum’s collection, which amounts to a total 173 selected items, also includes the greatest part of Onufri’s work. The post-Byzantine art works created by the great Onufri were then continued by his students, including his own son, Nikolla. All of the icons in this museum have been painted by Albanian iconographic painters in the period between the 16th and 20thcenturies. 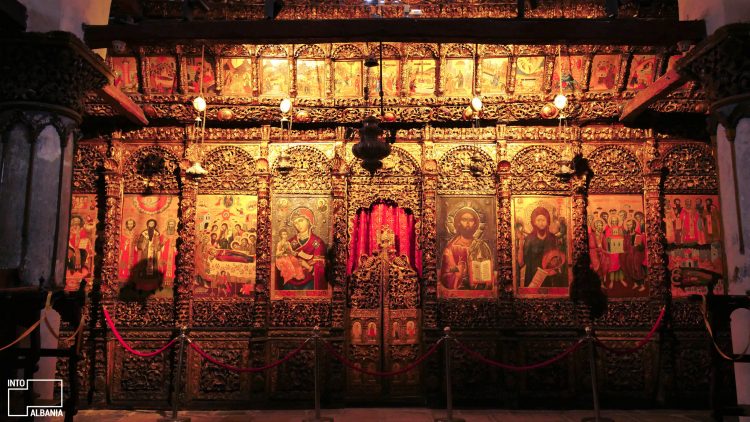 Onufri’s compositions stand out in terms of a marked color harmony which, according to art scholars, signaled a revolution in style at the time of his artistic activity and subsequently. Other telling traits of his signature style are the subtlety of his portraiture and, most importantly, his famous shade of red, dubbed “Onufri red” after the artist.  Indeed, the uniqueness of his icons inspired a great following as well as an army of researchers who are dedicated to the discovery and analysis of his work.

Where to find more from Onufri

Fortunately, many of Onufri’s icons, dating back to the end of the European Renaissance, have managed to survive. In addition to Berat, research also locates Onufri’s art in Shelcan Church, in the outskirts of Gjinar in Elbasan. There, you can see the heavily damaged but still beautiful fresco. You can also find Onufri’s works in the National Historical Museum of Tirana, specifically in the pavilion dedicated to post-Byzantine iconography. One of the most impressive works here, dominated by the “Onufri red,” is his “St. Mary’s Entrance into the Temple.” It is in this same pavilion that you can witness works from the artists of the Berast School of Iconography, the school funded by Onufri. If you find yourself in Korça, stop by the National Museum of Medieval Art to see some more of Onufri’s gorgeous paintings.