Onufri Red: The Revolutionary Hue from Albania’s Master of Color - Into Albania

Onufri Red: The Revolutionary Hue from Albania’s Master of Color

Somewhere between blood orange, fuchsia, coral and red, lies one of the most undefinable and dazzling hues in the history of art, created by Albania’s own master iconographer, Onufri.

Red is perhaps the color most associated with the Balkans, be it for the fields of blood-red poppies punctuating much of the region’s countryside or the region’s dramatic character and history. Its rich hue of blood is the one that colors Albania’s flag. Yet, there is another Albanian red that has made a splash since the 16th century. The innovative shade was dubbed “Onufri red” by the French, and the rest is history.

In the 16th century, Albania’s virtuoso iconographer Onufri carved his name in Albania’s “red” history and culture by creating a shade of red no one had seen before. Born in the early 16th century, the backdrop to Onufri’s childhood was the Ottoman conquest of Albania. As such, his Christian iconography was not only innovative but outright revolutionary for the time. Onufri’s depictions of St. Mary, Christ and countless biblical scenes are immersed in one of the most brilliant red hues that the country and, perhaps the entire region, has seen. It was thus that the “Onufri red” was born.

What is “Onufri red”

The rich hue verges on blood orange and fuchsia but, as with anything truly great, the color’s rich dimensionality and dazzling power is undefinable. Only Onufri’s own name can do it justice. What one immediately notices is how contemporary the hue appears. Indeed, Onufri was an artist that was far ahead of his time. Not only his colors but his compositions, as well, signaled a revolution in style at the time of his artistic activity and continued to inspire an entire school of iconographers. He introduced greater, more realistic, facial expression to his icons as well as an unprecedented kind of individuality.

See “Onufri red” for yourself

Onufri’s name graces the National Iconographic Museum in Berat, located in the Dormition of St. Mary Cathedral, inside the Berat Castle. The museum’s collection, which amounts to a total 173 selected items, also includes the greatest part of Onufri’s work. Huge Bonus: the museum has the greatest digital audio-guide system in the country. You get all the historic (and juicy) details in four languages!

You can also find Onufri’s works in the National Historical Museum of Tirana, specifically in the pavilion dedicated to post-Byzantine iconography. One of the most impressive works, dominated by the “Onufri red,” is “St. Mary’s Entrance into the Temple.” The same pavilion exhibits works from the artists of the school funded by Onufri, Berat School of Iconography. If you find yourself in Korça, stop by the National Museum of Medieval Art to see some more “Onufri red.” 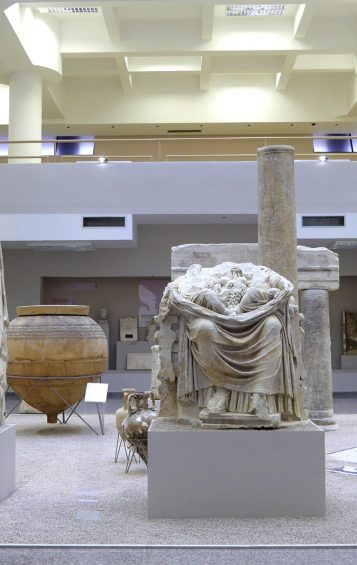 One of the most visited museums in the country, the Archaeological Museum in the ancient coastal city of Durrës is an ideal and comprehensive introduction to Albania’s rich history throughout the millennia.  The largest museum in the country, the Durrës Archaeological Museum holds some of the most treasured prehistoric and ancient objects in the history [...] The Armed Forces Museum in...

Weapons of all ages and rare artefacts, dating back to the age of Skanderbeg up to the present, will take you on a journey through history in the Armed Forces Museum, located only a few minutes from Tirana’s center. The museum reflects the country’s most important military events, expresses the identity and traces the development of [...]

The Armed Forces Museum in... 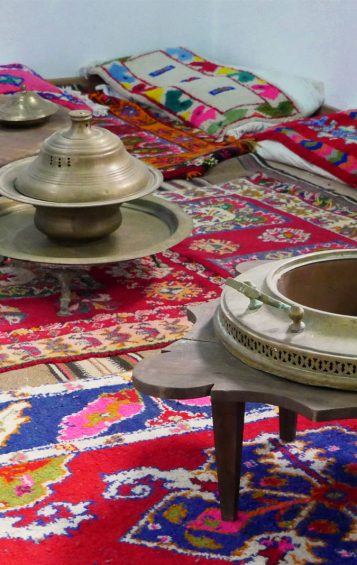 Learn more about Kukës’ culture and lifestyle as well as why the “city of tulips” was also nominated for a Nobel Peace Prize. Kukës, located in the northeastern part of the country, is the premier city of Albanian hospitality. Its unique appeal is also due to its ruggedly beautiful landscape, something that has contributed to [...] 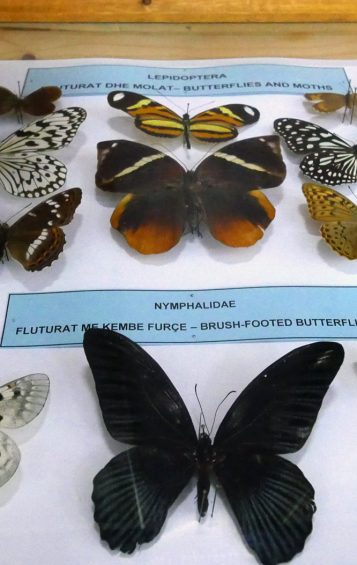 Museum of Natural Sciences: An...

Conveniently located a few kilometers from the capital’s center, the museum, the only one of its kind in Albania, takes you on an unforgettable exploration of the country’s myriad living organisms through its nicely exhibited collections.   Founded in 1948, as part of the Albanian Institute of Science, the museum exhibits the country’s entire natural [...]

Museum of Natural Sciences: An... 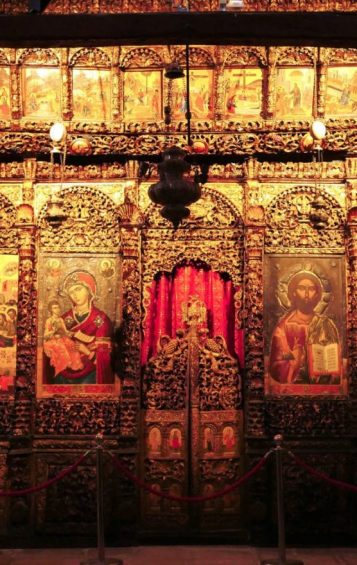 Launched in late May of 2019, the first-ever comprehensive, quadruple-language audio-guide of the unique Onufri Museum has infinitely enhanced the museum-going experience in Albania.  While Albania offers an amazing choice of museums and archaeological sites, the country has been late in adopting digital audio-guides. The trailblazer has been the well-loved Onufri Museum, located within the [...] In the center of town stands the museum with one of the richest, and most beautifully displayed, collections of historical and archaeological objects in the country. Though a summer destination for many, Vlora is one of those cities that attracts visitors throughout the year. Not only a seaside town, Vlora has an unparalleled historical significance [...] 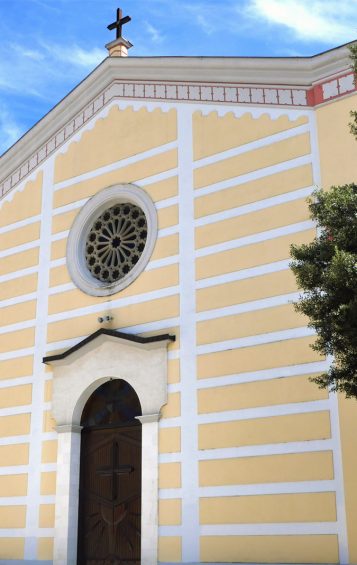 One of the grandest in the Balkans, the Cathedral of Shkodra has had an extraordinary story of survival.   The Cathedral of St. Stephen, the patron saint of the city of Shkodra, is also known as the Great Church. Once upon a time, the cathedral was located within the walls of the Rozafa Castle. In [...] 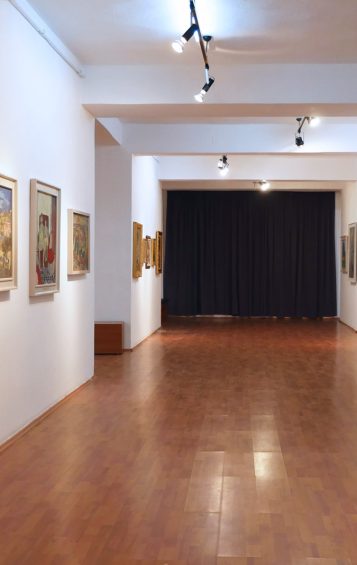 The gallery of one of the most historically artistic cities in Albania is a rich yet intimate introduction to the art and culture of the entire country. Founded in 1973, the Gallery of Shkodra is an inspirational stop in the grand journey of the country’s visual arts. Open every day of the week, with the [...] 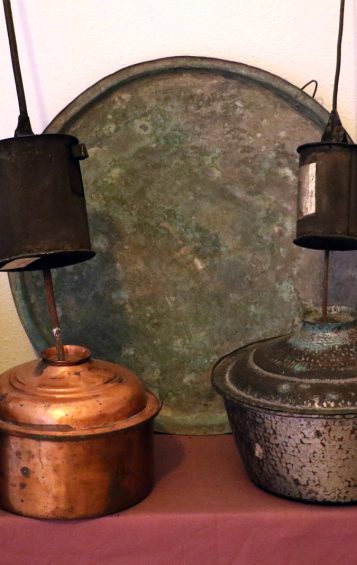 The Dibra Museum, located in the heart of the city of Peshkopia, with its comprehensive historic, ethnographic and archaeological pavilions, is a great opportunity to become familiar with the history of this intriguing part of the country. Because of its northernmost location, the Dibra region is one of the most overlooked of Albania even though [...] 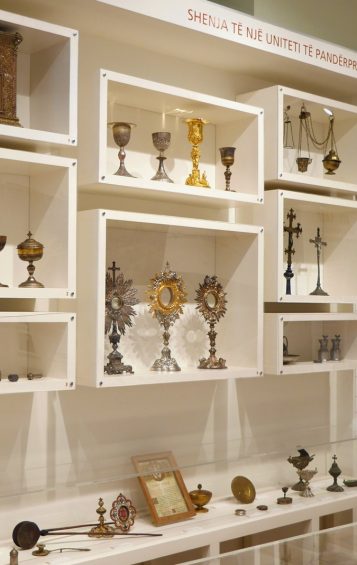 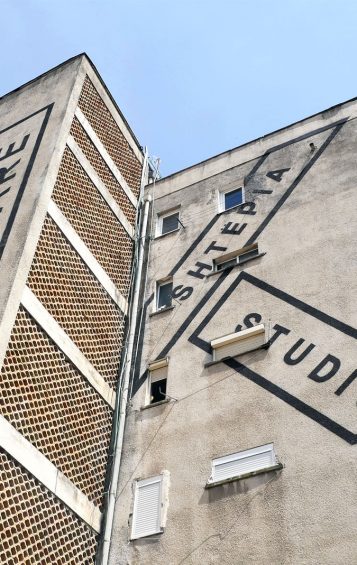 A fascinating residential building, which at the time of construction was criticized for a visible Western influence in its cubist style, houses the House Studio Kadare, a space inside Ismail Kadare’s former home that now celebrates the internationally renowned author.  The Famous Albanian author Ismail Kadare’s former house is now open to the public. The [...]

One of the most fascinating mosaics in Albania, the 6th century Mosaic of Mesaplik located in the National Historical Museum, raises multiple questions regarding the portrait of an unidentified person and mysterious inscription. No one can know how archeologist Damian Komata felt in 1979, when he uncovered the forgotten Mosaic of Mesaplik among the ruins [...] 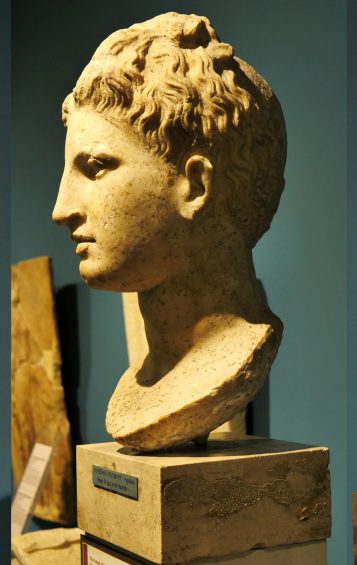 Museums are the passports of each country’s history. Indeed, without them, it would be impossible to verify truths on the origins of any civilizations. Albania’s own National Museum of History is located at the heart center of the capital. In its beautifully arranged pavilions, you can find several of the national masterpieces, and sources of [...] 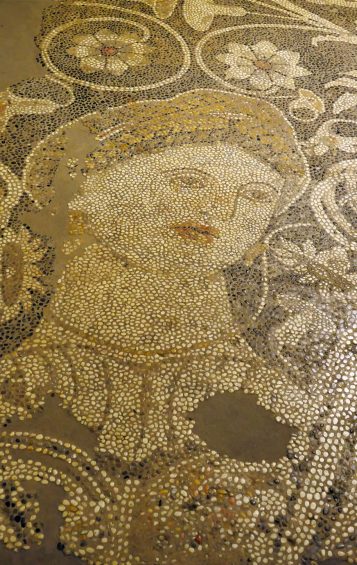 Like the Dea of Butrint, the Beauty of Durrës (Bukuroshja e Durrësit), dates back to the 4th century B.C. However, it was as late as 1918 that Austrian archaeologist Camillo Praschniker discovered the masterpiece. The foreign scholar first found this ancient mosaic within the foundations of an old house in Durrës. The conclusion of the Second World [...] 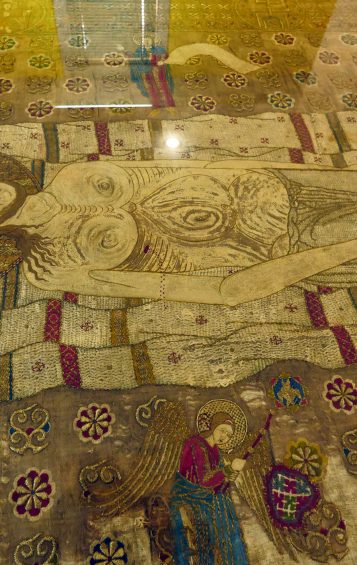 The Epitaph of Gllavenica dates back to the distant year of 1373. This masterpiece is Albania’s own version of the Shroud of Turin, though more ornate and intricate in nature than the famous shroud. The Epitaph’s name, given by the scholar Theofan Popa, is based on the ecclesiastical title of Bishop Kalist of Gllavenica and [...] 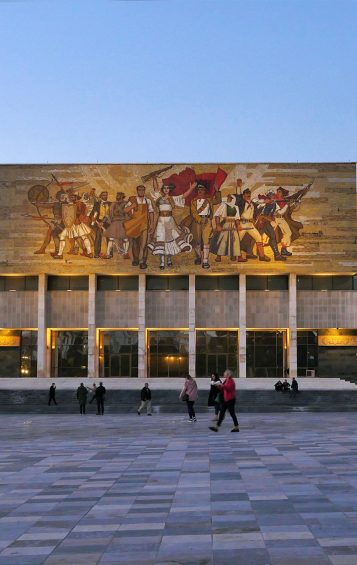 The National Historical Museum of...

Taking you from the Bronze Age, to the Communist era, and everything in-between. Located in Skanderbeg square, at the very heart of Tirana, the National Historical Museum is home to the country’s vast historical and cultural heritage. Inaugurated in 1981, this space now holds more than 5,000 artifacts in its multitude of splendidly designed pavilions. The [...]

The National Historical Museum of... 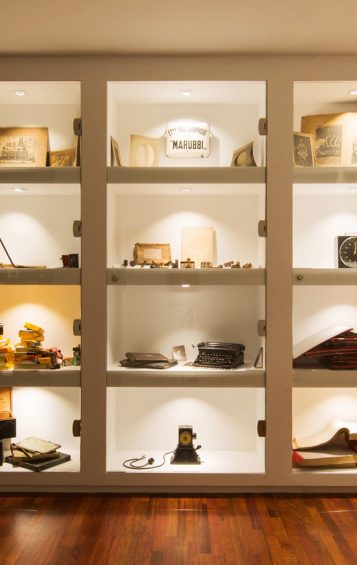 They say that a picture is worth a thousand words. How much worth then would be found in Marubi’s collection of 400,000 hauntingly-beautiful photographs of Albanian life, spanning from 1850 until today? The Marubi National Photography Museum, now conveniently located along the main promenade of the city of Shkodër, displays an extensive collection of negatives mounted [...]