Shebenik-Jablanica National Park is the largest in Albania, with a surface of 33,927 ha. Less than a two-hour drive away from Librazhd, the road to the park, though not paved, is neither difficult nor tedious. Guided by Shebenik-Jablanica Outdoor Adventure, we join the excursion toward Kallkan Mountain, only one of the many tours that take place within the park.

The first stop is in Llang Village, among its 300-year-old homes. We continue our journey toward Stebleva, where we also find the area’s Tourist Information Center. Typical mountain houses look far and beyond into the vast, dense forests of the park. Though the visit is short, this tranquility of village life creates a pleasant atmosphere whose effect lingers.

Upon leaving Stebleva, we ride a bit further to reach a suitable point from where we can begin the climb. Albert Kaleci, the trip organizer and guide, informs us about everything we need to know. The one thing we know for sure is that walking through the forest at 1200 meters above sea level feels especially refreshing on this hot summer day.

Hiking at 1200 meters above the sea level, photo by IntoAlbania

The fresh water springs of Mount Kallkan create several fairytale-like streams. The colors created immediately immerse you into an impressionist painting, while the relaxing sound of the water flowing never leaves our side. 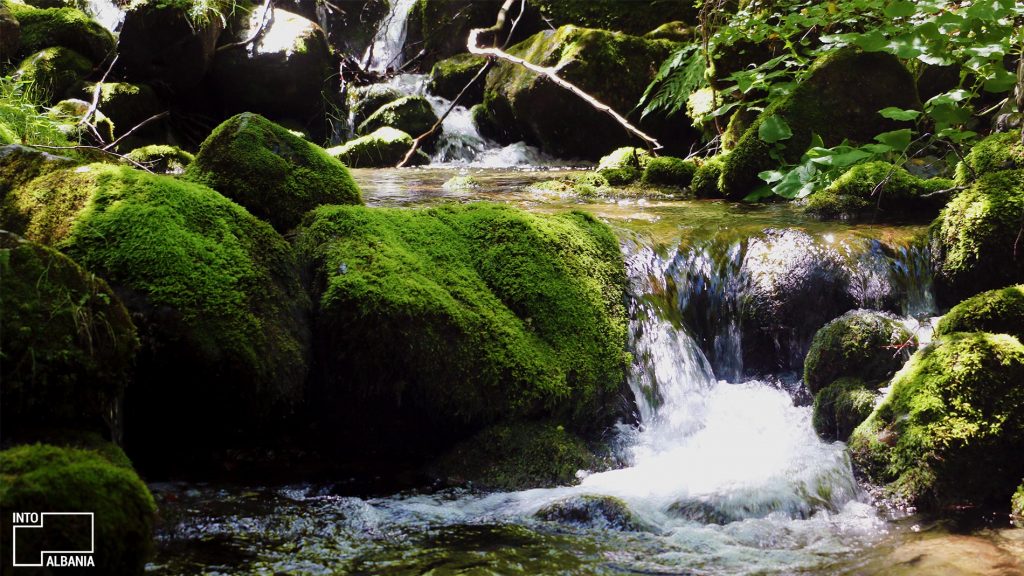 Water spring at the Shebenik-Jablanicë National Park, photo by IntoAlbania

We climb one of the observation towers built during the Communist period. Then, this tower was used in order to oversee the country’s border with Macedonia. Now, it remains a relic of a bygone era, a detail which makes the climb no less interesting. On the contrary, one thinks of the many people who must have spent their youth here while time, to paraphrase Dino Buzzati, stole away the beauty of life.

Observation tower on the border with Macedonia, photo by IntoAlbania

The path is designed in such a way that it is very easy to navigate. Countless flowers, fungi, butterflies and the constant aroma of clover remind you that we are, indeed, in the park that contains 32% of the entire county’s flora.

After a three-hour hike, we find ourselves in a resting area of Vëshërica, at an altitude of 2000 meters. This is the right moment to eat any food you may have taken along or to cool off near a refreshing water source. We are preparing for our final climb to the peak of Kallkan.

It takes us about 3 hours to climb to the top of Kallkan Mountain, at 2189 meters above sea level. For an athletic person, the climb is not difficult and the panoramas from the peak are truly spectacular! From here, you can see forests and meadows, Mount Shebenik, Black Mountain in Macedonia, and a nearby lake.

The total walk and climb lasts for approximately six hours. While there is more to see around this park, this particular journey is sufficient in familiarizing you with this area, one of the most impressive natural resources of the country. For half a century, this park served as a protected military zone, starting from the area where Albania borders Macedonia. It was precisely this isolation that today gives the park its rare appeal. While walking around it, you feel as if you are the first to tread on its paths.

Note: Multiple hiking trips in various zones of the park are organized every weekend. There are over 14 glacial lakes, 3 artificial lakes, several hermit caves, and peaks higher than that of Kallkan, all of which you can visit on a tour of your preference.

Kukës is blessed with one of the most stunning landscapes in the entire country with grandiose peaks, rich soil, and countless water sources that make for a spectacular hike. Ermal Hallaçi, head of several wonderful guides in the Kukës region, confirms that 2019 has been a good year for mountain tourism. The hike along the [...]