Rapsodia: A Seat at the Most Modern Authentic Table in Albania - Into Albania

Rapsodia: A Seat at the Most Modern Authentic Table in Albania

Situated along kilometer 4 of Shëngjin, Rapsodia is one of the most modern and unique restaurants in Albania. Thanks to the expertise gained from his years in Italy, the restaurant’s head chef, Alfred Marku, has become an ambassador of contemporary Albanian cuisine.

A salad sprinkled with sunflower seeds that immediately brings back the nostalgic 90s. A fish perfectly cured in salt that instantly immerses you in the waters of the Adriatic, only a few kilometers away. A chicory-filled jar takes you on a journey along the country’s rugged landscape. Chef Alfred Marku’s table is an explosion of flavors, masterfully created to nourish all of the senses, triggering a string of nostalgic recollections in the Albanian guests while giving its international ones a carefully crafted taste of Albania. Get ready for the unique experience that is Rapsodia! 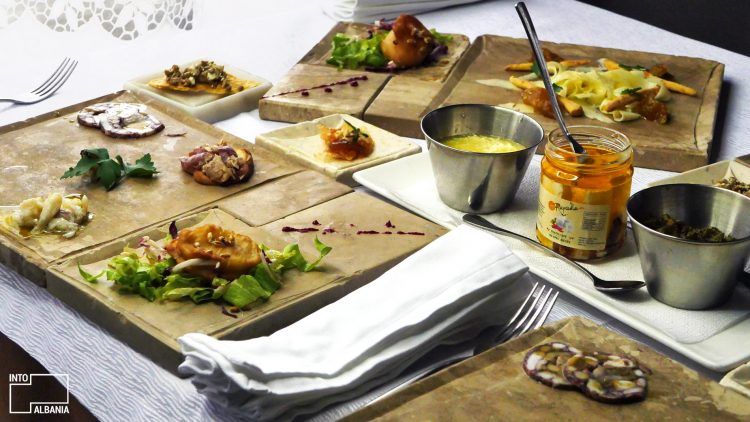 “When one eats, one should turn into a child again.” This is only one of Marku’s hard-earned mottos, accompanying him along every step of his long and successful career. Always striving to retain a childlike curiosity and passion in his cooking, Marku creates dishes that are borne of rigorous study as much as they are from a moment’s inspiration. Likewise, he likes to keep his guests guessing on the combination of tastes that causes an instant return to childlike delight and childhood flavors. 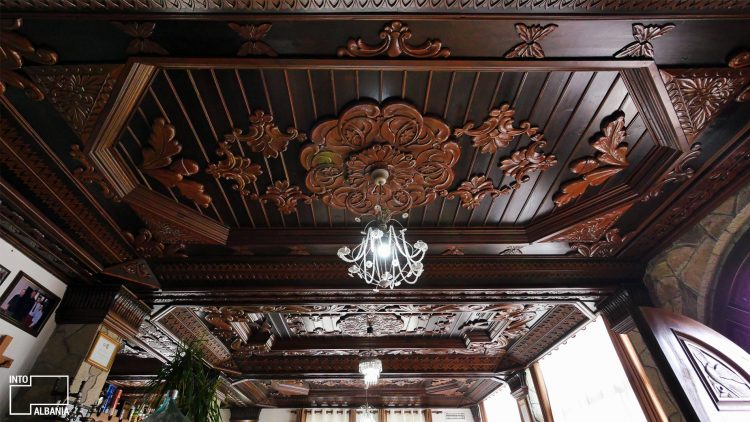 Inside the restaurant. Photo by IntoAlbania.

Marku was a child himself when he first emigrated to Greece, at 12 years of age, followed by a move to Italy when he was 15. Starting as a dishwasher, it was the restaurant’s kitchen that grabbed his attention. Cooking subsequently became Marku’s passion and eventually his life’s work, a profession which he ultimately transformed into an artform. 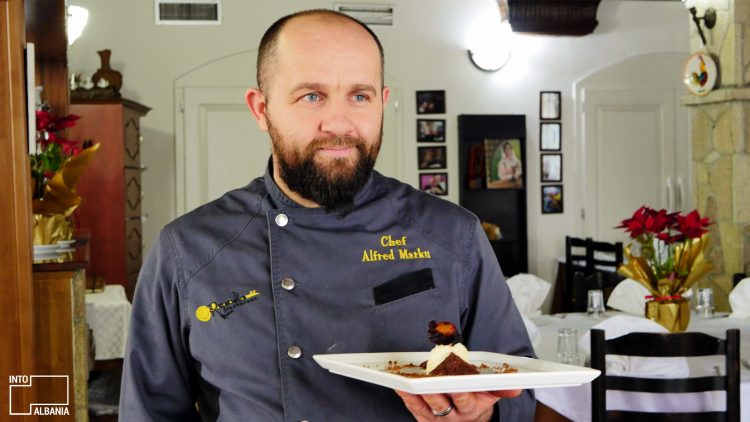 Following valuable experiences in Michelin-star restaurants, Marku felt sufficiently confident to take his mastered skill to his native country and offer his now-famous tasting menu. Chuckling, he confesses that the only reason his restaurant survived during the first five years was because everyone criticized him. As a trail-blazing, avant-garde chef for the then-traditional Albanian gastronomic sphere, his work was cut out for him. Making a clientele that, until then, was accustomed to abundant portions of traditional fare, appreciate and find satisfaction in his minimalist concoctions was, indeed, nothing short of impossible.

Pictured are some of the typical dishes served in Rapsodia. Photo by IntoAlbania.

Rapsodia’s menu offers a rich and diverse selection of tasting menus entitled Albanian Rhapsody, Meat Rhapsody, Fish Rhapsody, Rhapsody with Cheese and Veggies, Mixed Rhapsody and Kilometer Zero. The price points for each of these menus range from 1800 ALL to 2500 ALL. Rest assured that no matter which menu you end up choosing, a spectacular assortment of delicious dishes will come your way. 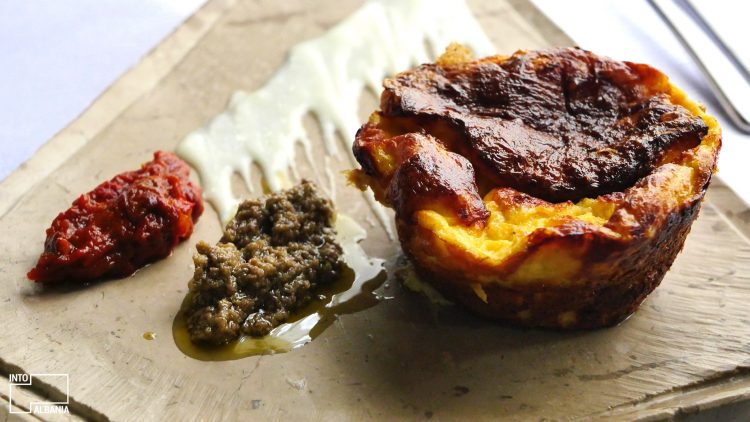 Marku’s culinary conception is, in fact, in perfect sync with the international gastronomical developments of the millennium, largely influenced by the world-famous Danish chef of Albanian original René Redzepi. Redzepi, through his minimalist style and his emphasis on the importance of local products on culinary authenticity, has truly revolutionized gastronomy in a global scale.

Kilometer Zero is one of Marku’s menu propositions, one which includes ingredients that have undergone zero kilometers of transportation, as the smart name suggests. Thus, all ingredients are either self-produced, in the restaurant’s farm, or locally-produced. This particular menu, similar to the others, implies an amazing journey of flavor that begins precisely at Rapsodia. 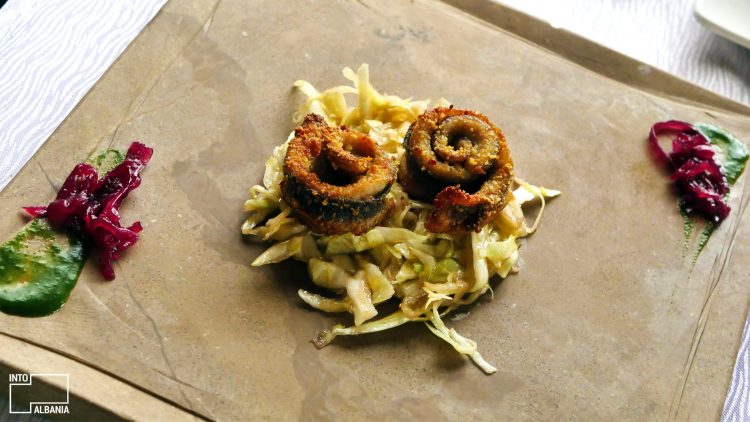 The Origin of the Name

Upon selecting the Fish Rhapsody menu, we found ourselves immersed in a sea of plates, which complemented one another not only visually and flavor-wise but in such unpredictable ways that one feels like taking up an epic song like the ancient rhapsodists. And, so, as you experience the entire procession, you also come to truly understand the name of this place. 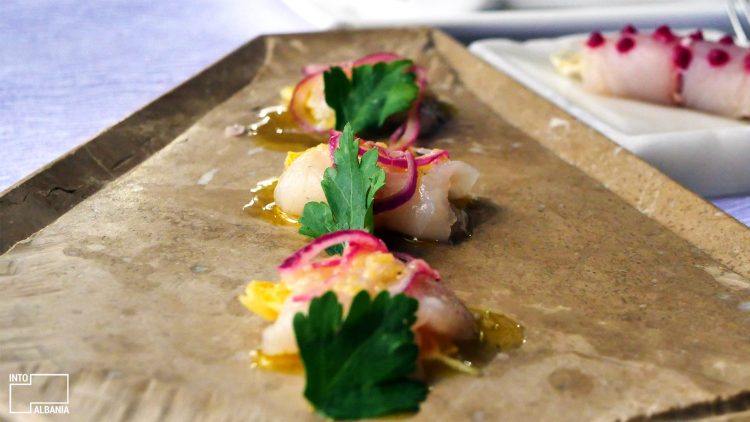 Marku remembers a guest at his farm-to-table in Lago di Guardia, a lady from Germany who described a dish he had served her as “a green rhapsody.” That was all it took to transport Marku to his homeland, aware at that moment that these words would be in his life for a long time. Shortly thereafter, Marku returned to his roots in Lezha, opening this revolutionary spot in 2007. 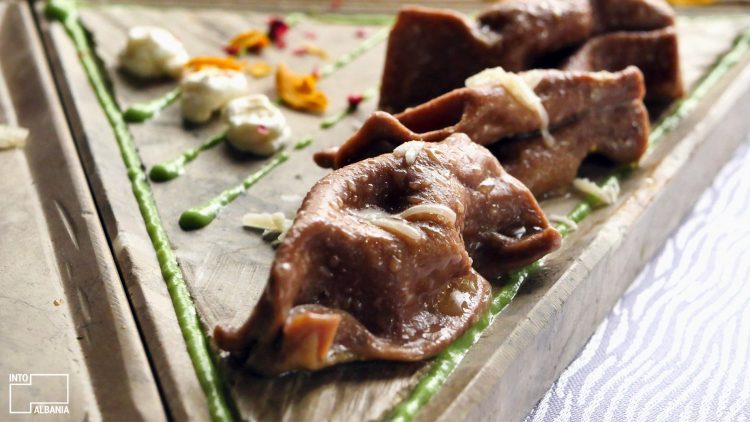 Pictured: Ravioli with cocoa paste and cream of carrot. Photo by IntoAlbania.

It seems that Marku is inspired by anything and everything, from a trip to dinner with friends. On a night like any other, back in 2001, after tasting a bruschetta with bacon and honey, he was inspired to create a dish which eventually won him the Dish of the Year Award in Italy. The dish Marku concocted was bite-size venison with grilled pork fat and fresh wild apple jam. Indeed, what appeals most to Marku is to deconstruct traditional dishes, thus simultaneously revealing the root of their flavor and preserving it while making it new. 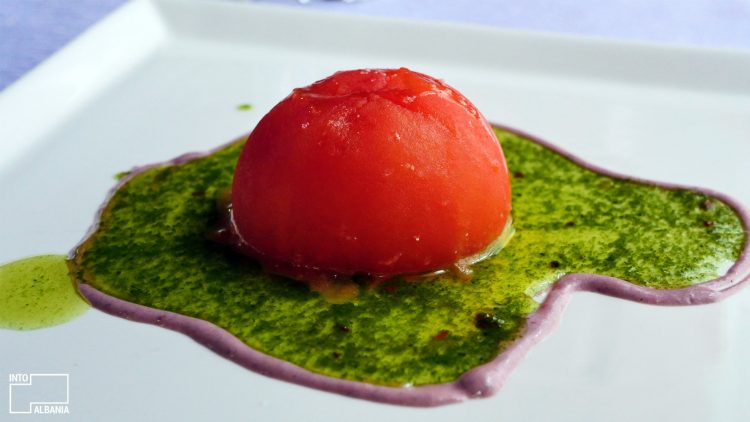 Pictured: Tomato stuffed with apples and cheese. Photo by IntoAlbania.

Our conversation with the chef has been pleasant and educational, peppered with an uncompromising sense of humor which renders the entire experience entertaining. Among many stories, he also confesses the greatest lesson the culinary art has given him: “Food teaches you the greatest thing you will ever learn and the most beautiful, to hold back on your prejudices and assumptions until you get to know and actually try something.”

A man whose actions greatly illustrate his words, Marku hurries to serve us an ingenious and unexpected dish: mullet with kadayif crostata and white chocolate cream.

There is no space for assumptions and prejudices here, only a moment to take this experience all in with a dish that, to borrow the chef’s own words, possesses that elusive perfect balance.