Rugged Landscape of Dibra - Into Albania

Most refer to Dibra’s northeastern highlands as Albania’s roof. This region’s highly diverse nature is due to the high peaks and low valleys found along Dibra’s rugged landscape. As one of the largest geographical areas of the entire country, Dibra boasts more than 50 spectacular natural monuments. Countless caves hidden among beautiful mountains, small lakes, mineral-rich water springs, alpine forests, and other spectacular natural sights await you in Dibra!

Dibra’s astounding nature peaks at the impressive heights of 2751 meters above sea level. Tourists visit the area around Mount Korab, for many reasons! Firstly, the Korab summit is one of the most popular among mountain climbers. The second reason is the rare, well-protected flora and fauna of the Korab-Koritnik Nature Park. Finally, Mount Korab itself is quite the majestic sight, with deep crevices that embellish its already intimidating appearance.

At first glance, the wide gorge resembles an inversed cone! At its very center, small and large lagoons punctuate the large green valley. This large glacier compound extends 800 m long and 230 m wide among wide rugged cliffs.  The way there is through the connecting road between the town of Peshkopi and Radomira Village. Remember that the elevation of the entire area is 2000 m above sea level! 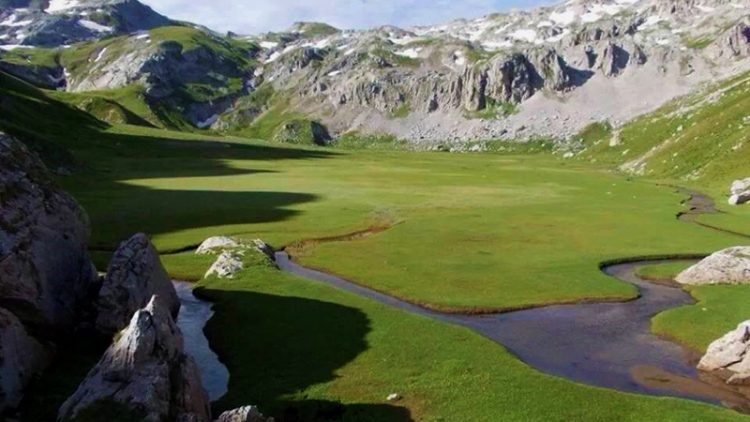 This lake is another icon of Dibra’s rugged landscape! Dibra actually hosts two lakes of the same name, one in Radomira and the other in the outskirts of Bulqiza (described in the section below). A typically beautiful alpine landscape surrounds the Black Lake of Radomira. In a country with a Mediterranean climate, like Albania, such alpine panoramas are unexpected and surreal. Yet, they not only exist but thrive in the cold temperatures of the region. Indeed, at 2,200 meters above sea level, this lake turns into ice for four months out of the year. Follow the route Peshkopi-Radomira and prepare yourself for a spectacular view!

The Martaneshi Highlands hide the other, equally beautiful, black lake of the region.  Similar to that of Radomira, the Black Lake of Bulqiza is an alpine lake with a depth that reaches about 60 meters. Nature has been kind to this area which boasts one of the most spectacular landscapes around. Dense beech and pine forests create an idyllic postcard-like scenery. Quite unforgettable! Follow the route Qafa e Buallit-Batër-Martanesh and, once you get there, you may hike the rest of the beautiful way to the lake.