This 300-year-old traditional villa, where the famous Albanian painter Sali Shijaku works and lives, is an invaluable art gallery for the capital.

Situated along Vildan Luarasi road, off of Siri Kodra Street, we enter the quarters of one of the most well-preserved “treasures” of Tirana and the residence of perhaps the greatest Albanian painter of the 20th century. Immediately, we run into a striking tableau depicting two roosters confronting one another in an allegorical painting that is full of life and vibrant colors. 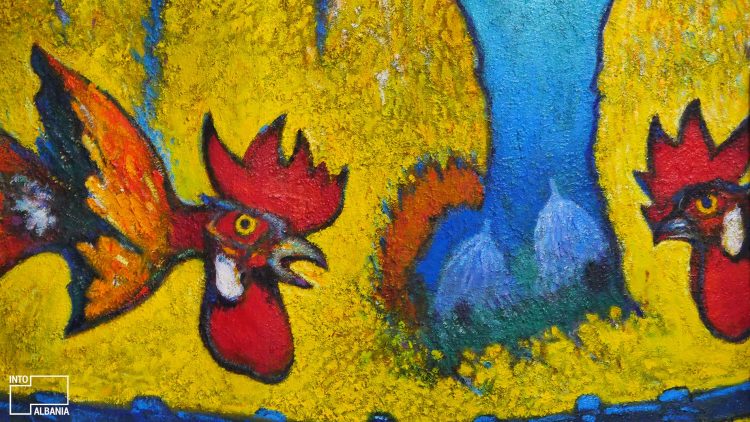 Sali Shijaku was born in Tirana in 1933. The artist has never permanently moved away from his city and this particular villa, which happens to be one of the oldest historical residences of the capital. Located in the well-known Selvija neighborhood, the villa is a rare representation of Tirana’s traditional architecture. It is, furthermore, a testament to Shijaku’s artistic genius, one which he happily shares with the public. Easily accessible and open to all visitors, the villa includes a restaurant-bar with indoor and outdoor seating, creating thusly one of the most unique spaces in Tirana. 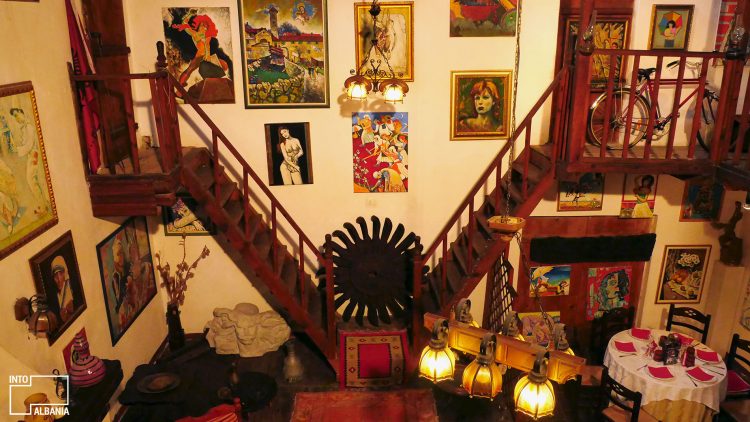 The gallery inside the villa of Sali Shijaku, photo by IntoAlbania.

Shijaku pursued his studies in St. Petersburg, Russia during the period of 1956-61, when the city was still called Leningrad. He recalls how one of his former university professors once told him: “you are similar to Van Gogh in that, if you cannot see the cleaning cloth in front of you, you have a hard time reconstructing it with your imagination; this is why, your starting point will always be nature.” Yet, Shijaku insists that, in most of his works, imagination has played a significant role although the subject matter of most of his oeuvre is fairly realistic and tangible.

Self-sacrifice for the sake of an ideal is one of Shijaku’s favorite subjects. Often reproached for being influenced by western artistic movements, it was in this subject that he felt he could best and most freely express himself, especially during the Communist years of strict censorship. 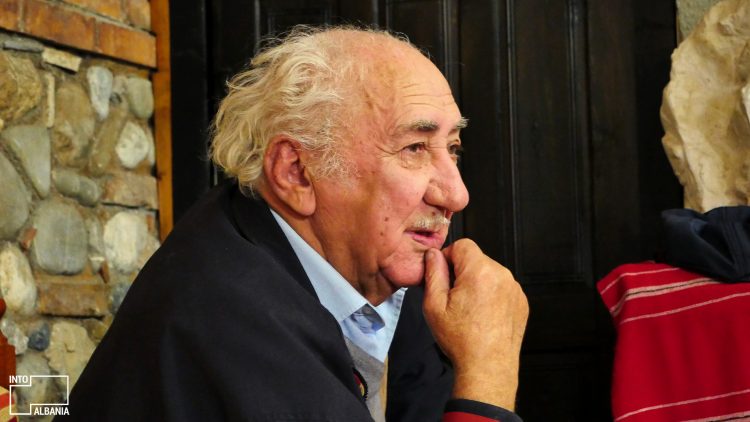 Shijaku’s most well-known painting, or the one that most people associate with the painter, is also one of the most prominent Albanian artworks of the mid-20th century. Painted in 1969, the tableau depicts national war hero Vojo Kushi climbing, barefooted, on an enemy tank in order to stop it. Today, it hangs along other Albanian art masterpieces in the 2nd floor of the National Gallery of Arts in Tirana. So iconic is Shijaku’s depiction of the barefooted giant hero, that the image has inspired some of the most powerful contemporary graffiti in the streets of Tirana. 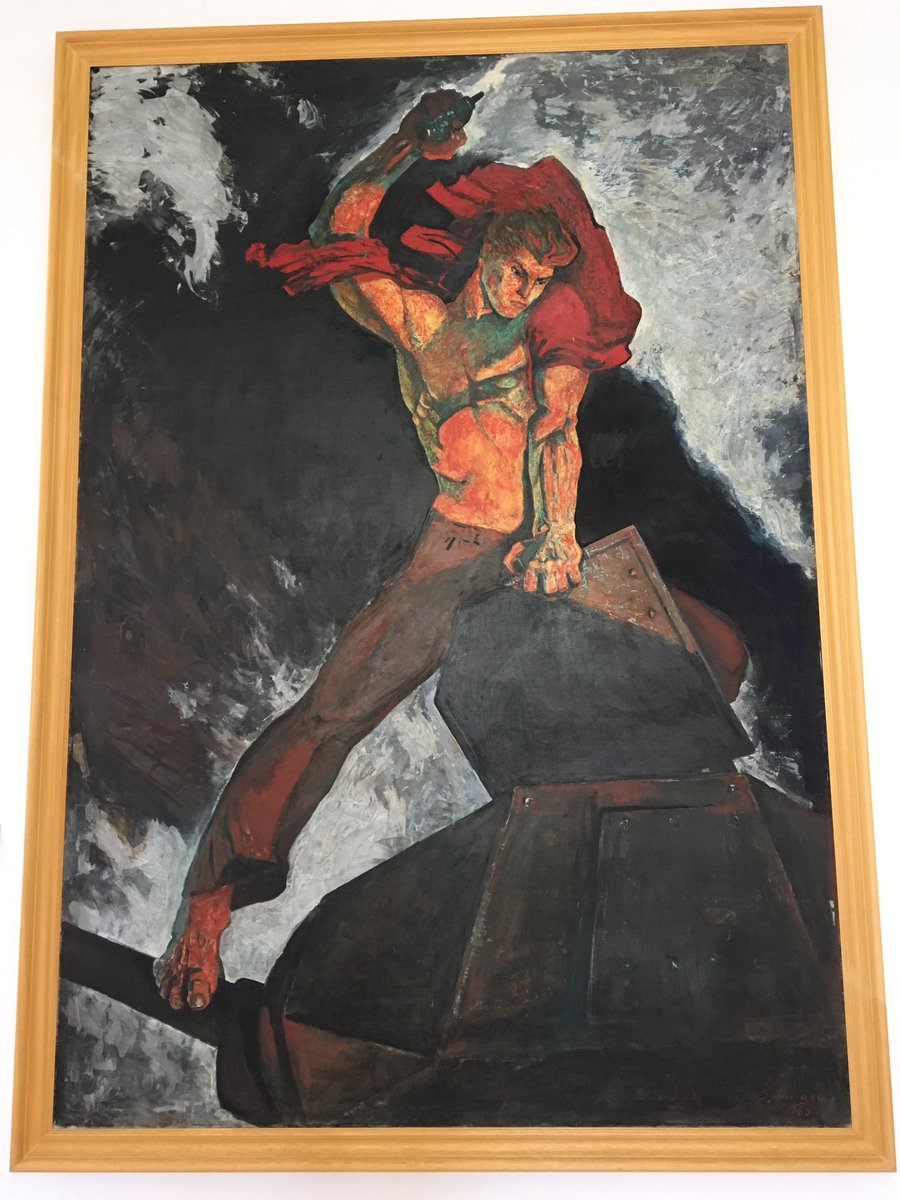 Vojo Kushi at the National Gallery of Arts. Source twitter.com, by Carolyn Perry.

Funnily enough, this painting may have never come to fruition had Shijaku not lived in this villa during the Italian invasion of Albania in 1939. Vojo Kushi once knocked on Shijaku’s door, seeking shelter from an organized siege against him and other members of the resistance against the Italians. It was Shijaku’s mother, Deja, who opened the door and warned Vojo Kushi that he was, in fact, surrounded by Fascist militia and had to flee. Shijaku recalls how the painting would move his mother to tears each time she saw it as it depicted Vojo Kushi exactly as she remembered him. 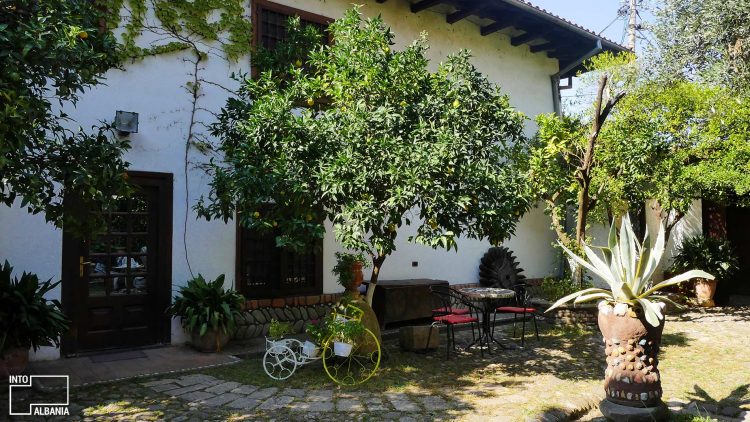 The villa’s yard, now a bar-restaurant as well. Photo by IntoAlbania.

Another legendary tableau depicting Albanian heroism is that of Mic Sokoli, a war hero who, entirely bare-chested, confronts an enemy gun machine. Several variations of this and more of the abovementioned iconic scenes are exhibited around the villa. 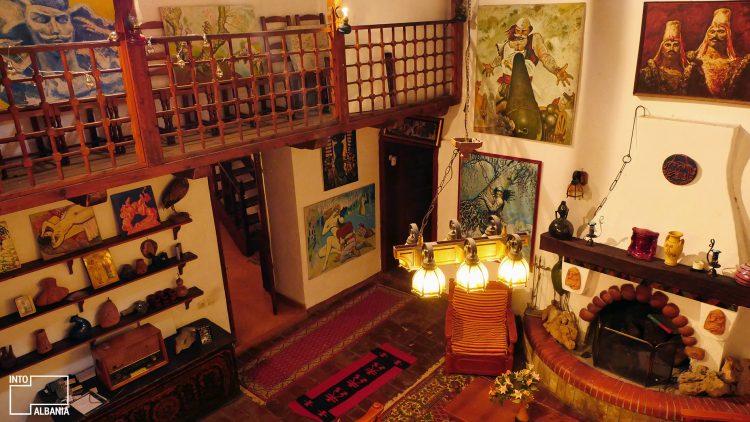 Inside the gallery of the villa. Photo by IntoAlbania.

Albanian myths and legends have been something of a shelter for Shijaku’s freedom of expression, a place where he could play with symbols and work his way around the censorship of Socialist Realism. Yet another famous painting of his, depicting the legendary figure of Muji in the shape of a mountain, was criticized for treading the limits of decadent surrealist art. When asked about this artistic choice, Shijaku quite humorously recalls responding that “the pyramid symbolizes the defense of the border against the foreign enemy.” 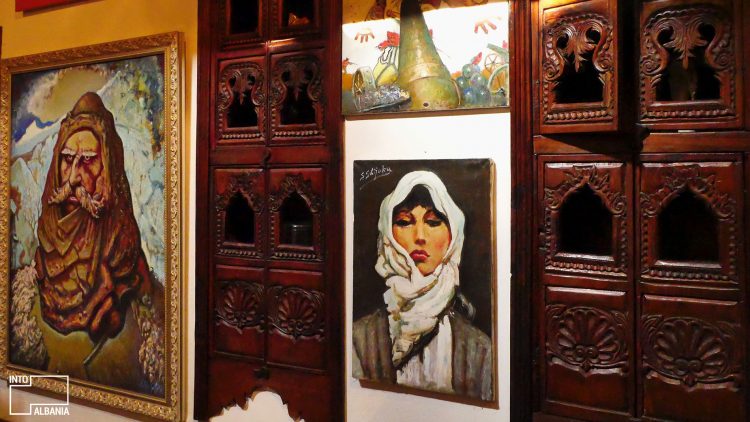 The painting of “Muji” and other paintings inside Sali Shijaku’s villa. Photo by IntoAlbania.

Shijaku takes special care to revisit his own works and motifs. He reminds us of how, in 1890, Claude Monet painted a series of the Rouen Cathedral’s façade under different lights and times of day, all of which are now considered masterpieces in their own right. Shijaku’s other preferred subjects are Albanian historical tableaus, natural landscapes depicting scarecrows and haystacks, as well as reinterpretations of Albanian myths. He admits he prefers using his fingers to paintbrushes, as this method allows him to place a richer and more vibrant layer of color on his canvas. 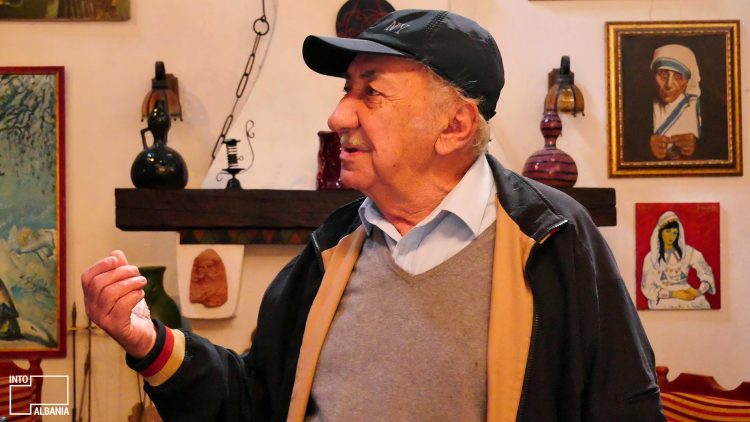 The painting he is currently working on is that of Muji being breastfed by Zana in order to become more powerful. According to Shijaku, the nude in this particular work would have most probably locked him inside the notorious Spaç prison, had this tableau been released during Communism. Once, when Shijaku was criticized on his art form, the actor Kujtim Spahivogli came to his defense by stating that, “at times, the beauty of form is so vast that it entirely engrosses the artist in it, making him forget the content.”

The rooms of the villa also serve as exhibition spaces. In one of the rooms, we meet a giant sculpture which was meant to be placed in the center of Skanderbeg Square. The object, sculpted by Shijaku, represents Albania as an 18-year-old, dressed in a traditional folk costume, spreading its wings like an eagle. Though at the time, the statue enjoyed widespread support, Enver Hoxha’s death in 1985 caused the sculpture to never see the light of day. 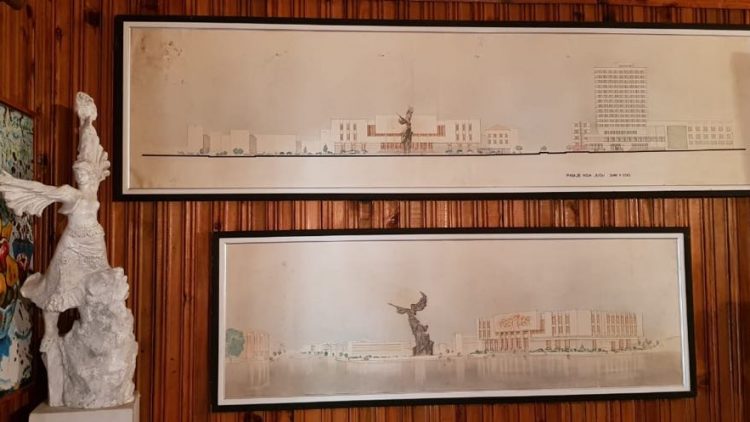 The model of the statue “Shqipëria”, photo by IntoAlbania.

While admiring the villa’s interiors, we serendipitously walk into a beautiful scene wherein the renowned director and sculptor, Muharrem Fejzo, is giving his last touches to a bust created to honor his friend, Sali Shijaku. While he has directed many other films, Fejzo is most known for his 1972 comedy “Kapedani” (“The Chief”), which he realized in collaboration with director Fehmi Oshafi, and which is considered the most popular Albanian comedy of all time. 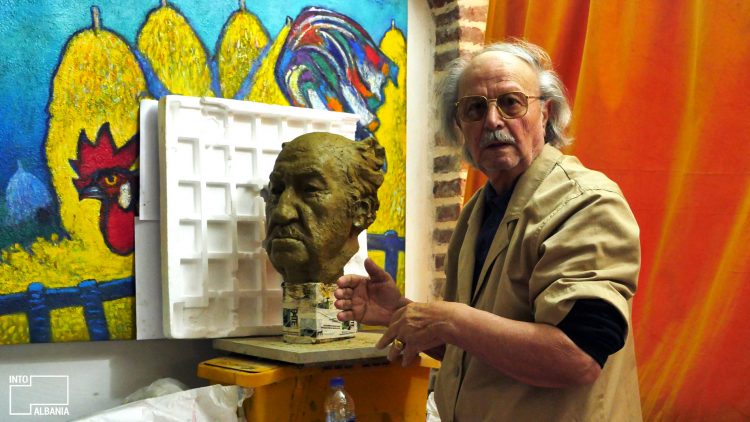 The villa’s restaurant-bar represents yet another reason to visit this extraordinary place. “The lungs of this neighborhood,” as Shijaku likes to refer to his villa, seems entirely isolated from the industrial buildings and the deafening city outside of its walls. In this peaceful oasis, visitors can simply enjoy a coffee, surrounded by trees and tranquility, or a midday meal among the painter’s masterpieces. 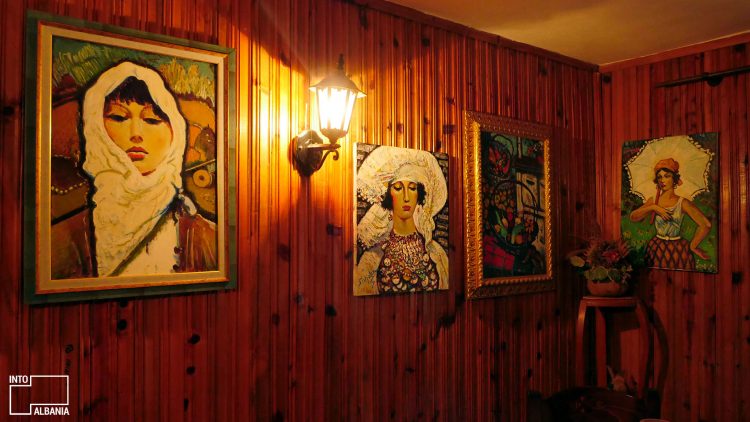 One of the rooms inside Sali Shijaku’s villa. Photo by IntoAlbania.

Tirana’s contemporary façade hides hundreds of years’ worth of history. This 300-year-old villa, which houses the oeuvre of such a significant figure of the nation’s collective memory, will acquaint you with a great portion of that history. Most of all, the visit here is one of those rare chances to plunge into the creative mind of an extraordinary individual who has given more to this city and society than they can ever hope to give in return.