Tradita Popullore: The Artisanal Museum of Folk Tradition - Into Albania

Some details from the old vest, entirely embroidered in gold. Photo by IntoAlbania.

As evidenced in the lengthy epic poem “Childe Harold’s Pilgrimage” as well as in his journals, Lord Byron, the famed British poet, considered Albanian traditional costumes to be some of the most beautiful in the world. Just take one look at this quite elaborate attire and it is easy to agree with the writer. Get up close and personal with these garments at Tradita Popullore (The Artisanal Museum of Folk Tradition), a space in which these costumes are displayed and available for purchase. Located a stone’s throw from Tirana within the commercial centre of Casa Italia, just on the outskirts of the city. 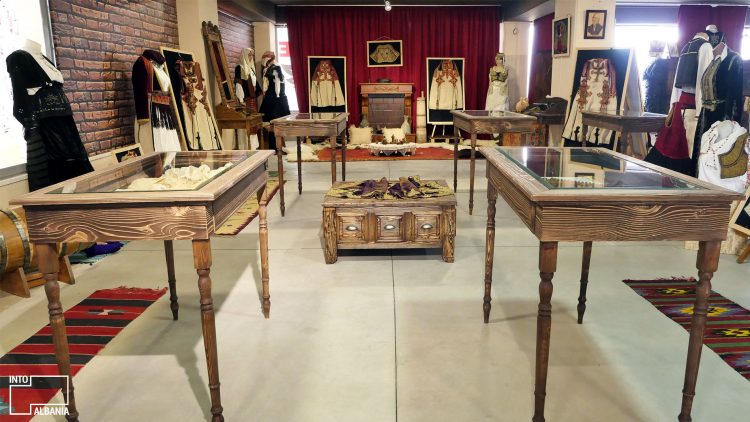 Century-old costumes and garments, intricately reproduced by the hands of skilled artisans at the museum workshop, make for a truly genuine encounter with Albanian culture. The ever creative Edlira Sulaj combined a passion for embroidery and clothing into an established enterprise spanning 15 years. The idea, to not only be a sustainable business venture but also an opportunity to preserve and promote a vital facet of Albanian identity. At the Artisanal Museum you can find xhubleta (Albanian kilts), traditional vests and costumes from all regions of Albania. The varied pieces enable any budding visitor to embark upon a journey into the country’s rich historical past, its traditions, customs and societal behaviour throughout the ages of Albania. 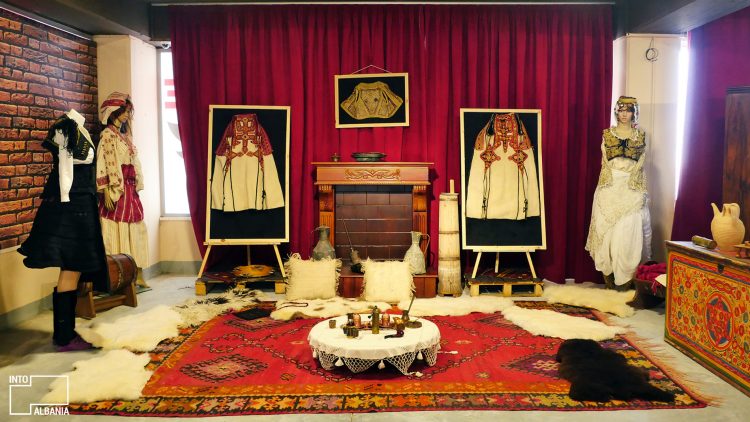 Part of the Museum section, photo by IntoAlbania.

Browsing the multitude of decorative traditional costumes, one in particular catches the eye. A dazzling vest, embroidered entirely in gold, is quite the stand-out piece of the collection. It’s tricky to pinpoint the exact date in which such a vest came to be, but it’s thought that its creation came around the turn of the 20th century. 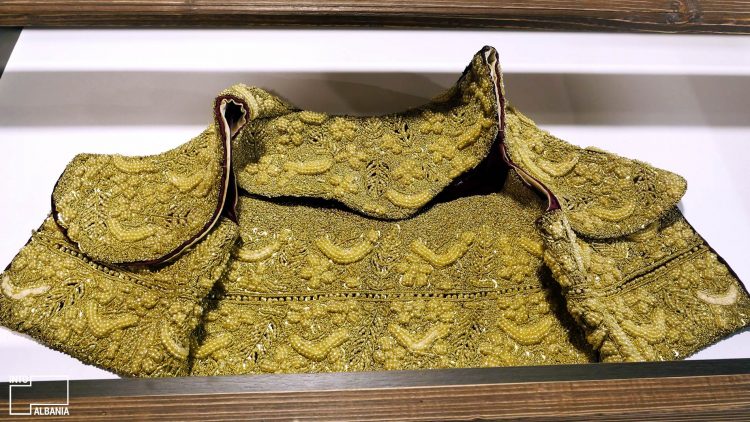 An old vest, belonging to the end of the 19th century or the beginning of the 20th. Photo by IntoAlbania.

Edlira explains that it may take years to finalise such a high calibre of vest, especially as the process involves just one individual! The thread used for the embroidery was cut into 5-millimetre pieces, with the raw materials being sourced from abroad. The vest originates from the region of Shijak, one of the most famous areas of the beys of Middle Albania. 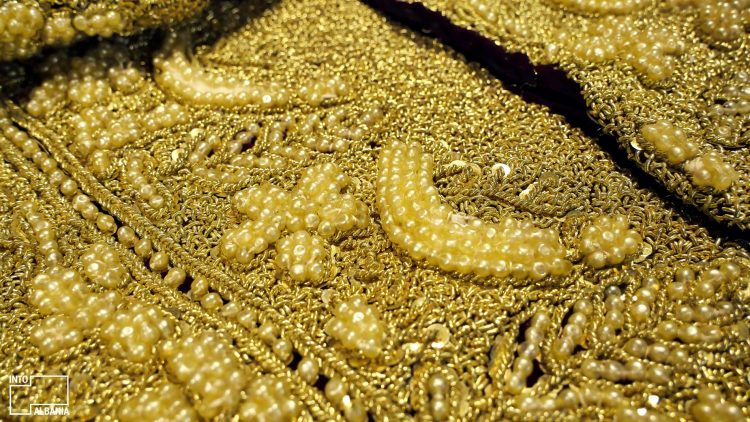 Some details from the old vest, entirely embroidered in gold. Photo by IntoAlbania.

The other costumes exhibited at the museum derive from the same period. Your attention is drawn to another artefact of clothing called xhybja e Mirditës, a kind of traditional vest from the Mirdita region. The monochromatic embroidery is the most fascinating aspect about this item, with layer upon layer of cream coloured detailing, it exhibits truly delicate craftsmanship. An elegant embroidery, known as needle’s lace (tantellë gjilpëre), rests on top of the woollen layer, with a large pagan cross as the marked centrepiece of this traditional garment. 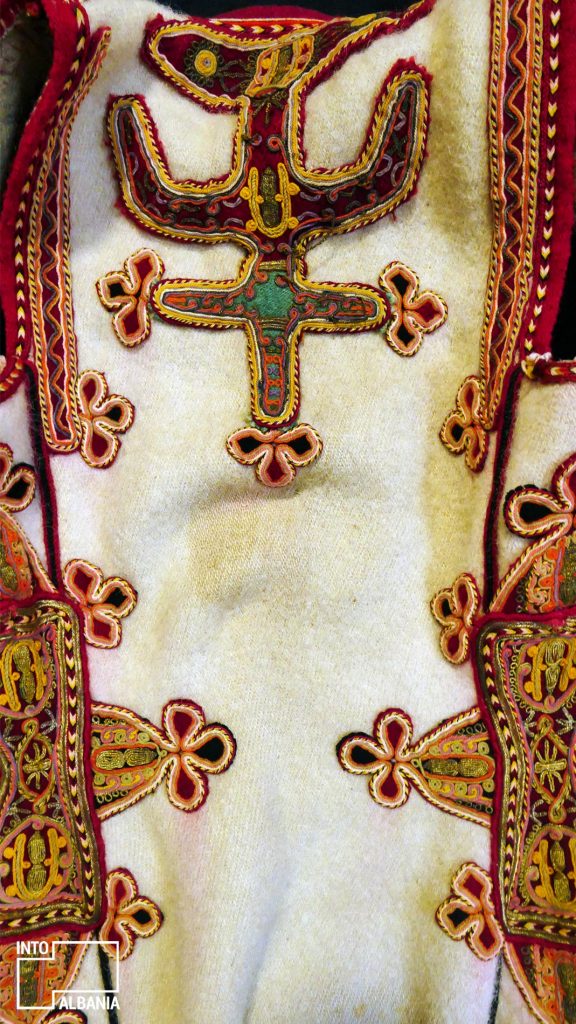 Xhybja e Mirditës, a kind of traditional vest from the Mirdita region. Photo by IntoAlbania.

Glance at Lord Byron’s famous portrait, in which he dons the traditional attire of Albania, and you will recognise the likeness to this particular version. Notice the sleeves. They are majestically embellished with a golden cross.  Both Byron’s painting and the vest hail from the same time period. It’s worth noting that Tradita Popullore includes a variety of other replicas, souvenirs, jewellery and other typically traditional Albanian artefacts within its space. 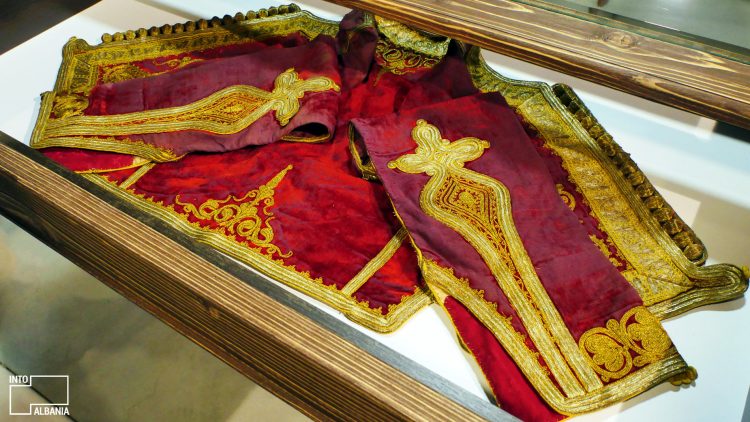 An old traditional Albanian costume, belonging to the end of 19th century and the beginning of 20th century. Photo by IntoAlbania.

The museum boasts a total of more than 400 varied and diverse items of clothing made for all ages of Albanian citizens. A significant amount of time and effort goes into each item. From the initial step of selecting the fabric, to the processing of the thread, then the combination of the golden threads, colours and adding other decorative details. The final step is the embroidering, the finishing touch that brings all elements of the garment together. 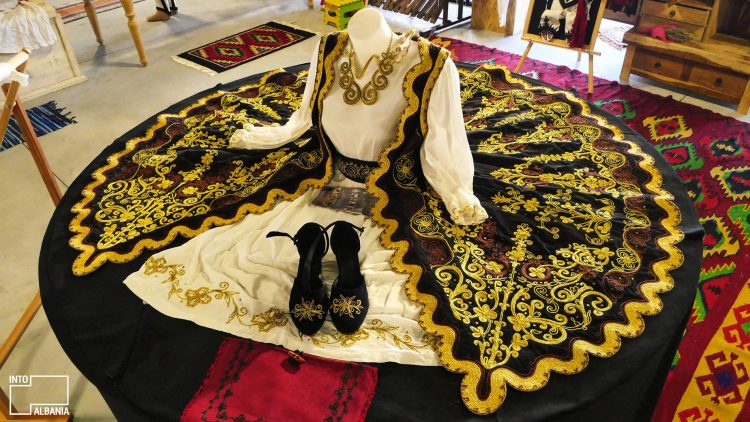 One of the reproduced dresses, photo by IntoAlbania.

All artisans here share Edlira’s profound passion and dedication to their everyday work. A select staff of twelve skilled artisans have become something of a go-to team for all manner of traditional costumes in the country. If a folk concert, festival, local event or even television show require a traditional costume, then Edlira’s team are where they go. 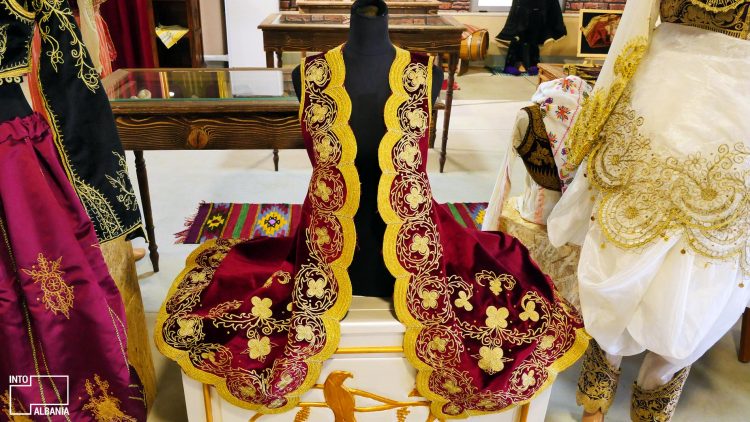 At Tradita Popullore, you don’t just get to see the museum space and its collection, but you can also witness the talented hands that create traditional garments through delicate embroidery, specialist threading, and dexterous loom work. As well as this, you might even fancy creating something of your own. Visitors can be involved in the making of their own personal attire through one of the many events organised here. 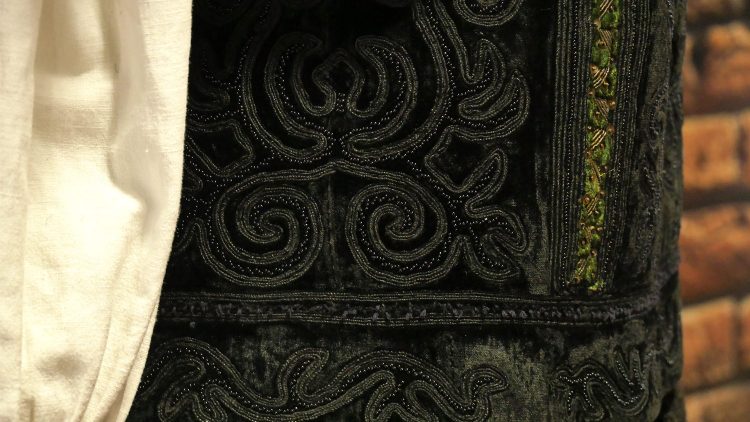 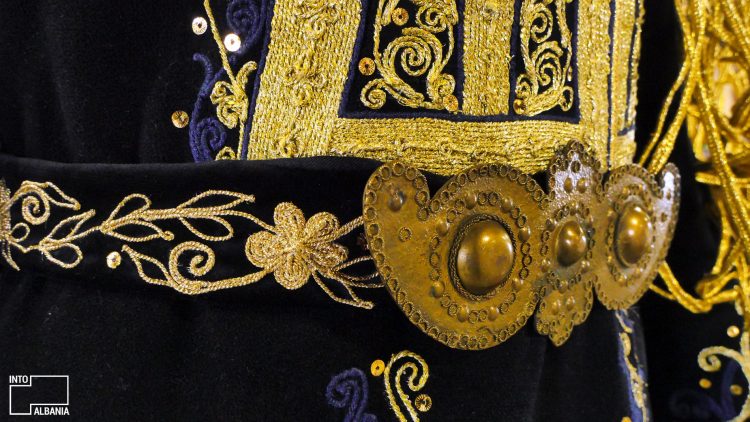 Details from one of the reproduced dresses, photo by IntoAlbania.

If you too want to get acquainted with the customs and traditions, purchase a memorable souvenir, or simply enjoy a lively and informative chat with Edlira, then we strongly recommend a visit. It’s a unique place, that preserves a significant facet of the country’s wonderful heritage and rich historical legacies.