The Famous Artisans of Gjirokastra - Into Albania

The Famous Artisans of Gjirokastra

Light cambric fabrics, wood and stone are the three fundamental elements in the construction and decorations of the well-known traditional houses of Gjirokastër. Windows covered in masterfully embroidered curtains, the wooden roofs above the warm living rooms, on the outside covered in stone, the latter being the element that gave rise to the construction of this city and continues to define it. Gjirokastra, a place otherwise known as the City of Stone.

In the famous historic neighborhood called Qafa e Pazarit, or the Old Bazaar, we meet one of the true masters of embroidery in town, Vjollca Mezini. This is a craft that Albanian women have cultivated and mastered throughout centuries. Vjollca has dedicated her heart and soul to this craft and her expertise shows in the effortless weaves her needle makes through the soft fabric. As she works, tourists surround her to witness greatness at work. Her multicolored threads create the iconic images of the city, its characteristic houses, the Castle of Argjiro, the bridges and cobbled alleys that the city is known for. Concentrating on such fine work for hours upon hours cannot be easy but, for Vjollca, the people’s appreciation of her beautiful pieces makes it all worthwhile. Her works include beautiful traditional geometric patterns in addition to the ones of the castle and the Bazaar, the symbols of the city of stone. 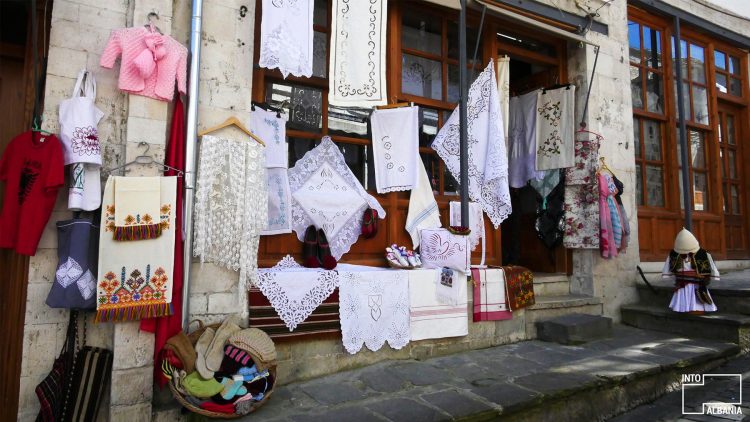 Along the way at the Old Bazaar, one will inevitably run into Anastas Petridhi, the master of woodwork. Each visitor who enters his shop is bound to find him working. The maestro will probably hold an unworked plate of beech wood or soft pine which, in a short amount of time, will metamorphose into a veritable artwork. Anastas learned his craft from an early age, before the ‘90s, in the city’s Artistic Workshop. On the variously shaped and sized engraved plates, Anastas, employing pyrography, always makes a special dedication for each customer. Using a modest tool called begu, he marks the desired shape onto the plate through a hot wire. In 2009, Anastas won first place at the National Artisanship and Cultural Heritage Fair held in Gjirokastër, creating thus the leading example for woodwork tradition in the city. 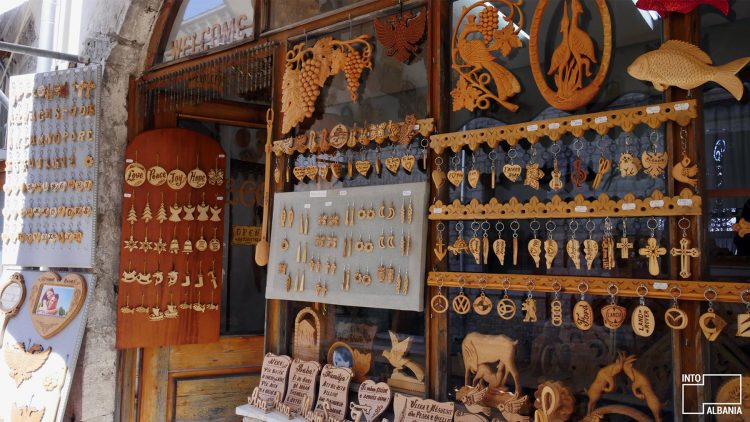 A man with intelligent eyes and deep wrinkles, testifying to a life lived in full, awaits you further down the bazaar. His name is Muhedin Makri and his trade has been passed on for generations, from his grandfather and father to him. His dagger and hammer shape the hard stone in a way only he knows how. Mr. Makri is over 70 years old but shows no signs of slowing down! Every morning he opens his modest shop and proceeds to work on orders made by both tourists and locals, people who want a handcrafted work that will resist the passage of time. Life taught him to work on nature’s hardest material, the one which makes up many of the houses in Gjirokastër. It is unbelievable to witness a shapeless stone turn into and the elegant work of art! In his shop you can find portraits of Ismail Qemali and Ismail Kadare, two men who have greatly influenced the history of the city and the nation at large. 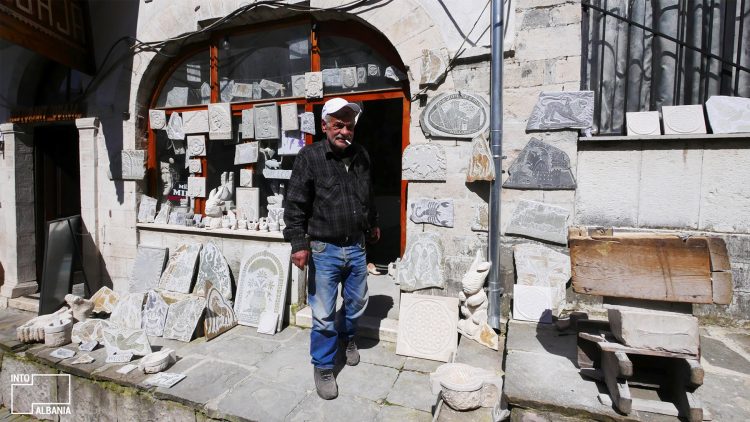