Right beneath the Rozafa Castle in Shkodra, surrounded by vast green valleys, rests one of the most majestic and well-preserved mosques in the country.

All the religious monuments scattered throughout the cities of Albania represent the famously harmonious coexistence of religions in the country. One such monument is the Lead Mosque in Shkodra, the epicentre of northern Albania. In addition to its rare beauty, whether seen up close or from a distance, this particular mosque is very well-known for its rich cultural and historic value.

Otherwise known as the Buşatlı Mehmet Pasha Mosque – named after the man who commissioned and oversaw its construction – the Lead Mosque sits in the valley underneath Rozafa Castle. Built in 1773-1774, the mosque is the only remaining religious monument from the Ottoman period in this area of the country, having been repaired a total of three times throughout the centuries. 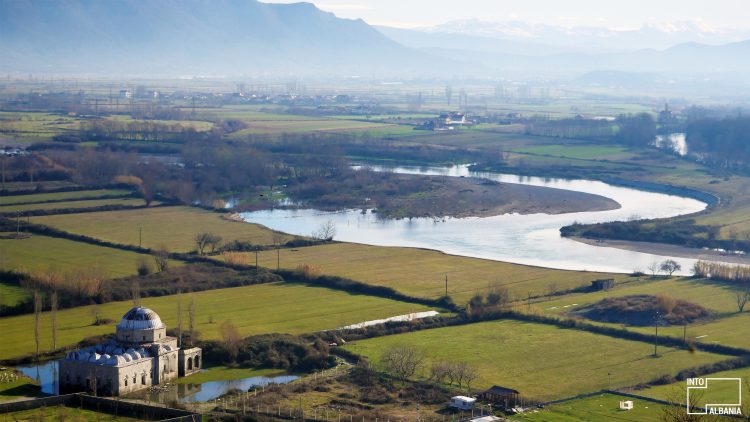 Lead Mosque, as seen from the Rozafa Castle. Photo by IntoAlbania.

Due to its high historic and architectural value, in the last century, the Albanian state took measures to preserve and protect this monument. It is for this reason that the mosque escaped unscathed from the Communist-era destruction of so many religious monuments. The Lead Mosque was re-instituted to the Muslim community after the post-1990 change in political system. The story of its resurgence remains a meaningful event in Shkodra’s cultural heritage.

The mosque gets its name from the lead coating it was given during its original construction. It exhibits the typical architecture of 18th-century Ottoman mosques, unlike other mosques in Albania, which mostly follow the style of Arabic architecture. As such, the building beautifully rises over large columns which hold the structure together while surrounding its internal courtyard. Smaller domes top the lower side of the mosque, echoing the similar and larger arched dome at the very top of the structure. Legend has it that the ruins of a 13th-century catholic church can be found in the mosque’s foundations. The walls of this highly symmetrical structure are built in a beautiful and reflective shade of white. The stones used to construct this mosque were transported from the Guri i Zi Village near Shkodra and, due to their particularly high quality, were crucial in the survival of the mosque throughout the years. While the mosque is well-preserved in its entirety, its former minaret was struck by lightning in 1967 and was unfortunately destroyed. 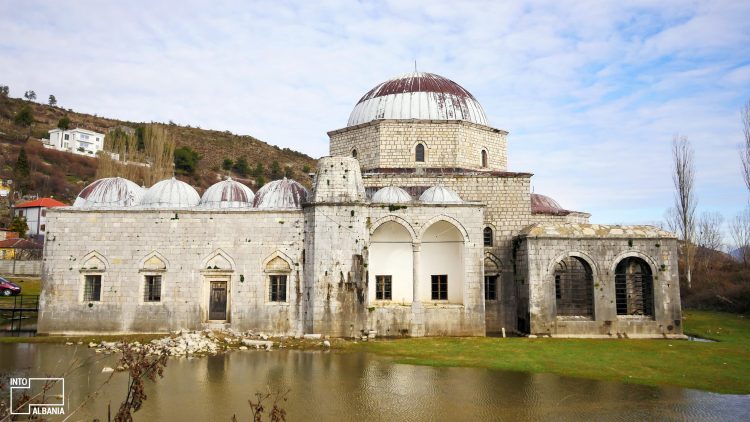 The mosque’s surrounding walls are continually affected by the deviating branches of the Drin River. During winter, the structure is often partly submerged in flood waters. While this scene may grant some beautiful views from the castle, in truth, the water is highly detrimental to the monument. Fortunately, the structure will undergo restorations which will make it more water resistant and protect it from further flood damage. This will ensure that this highly important national landmark remains on the list of Albania’s must-see monuments. The Lead Mosque, photo by IntoAlbania.