The Great Traditional Houses of Gjirokastra - Into Albania

The Great Traditional Houses of Gjirokastra

During his adolescence, the famous Albanian author Ismail Kadare called his hometown of Gjirokastra a strange city. He wrote so passionately of his hometown, however, describing each and every alley and stone used to build it, that he placed Gjirokastra permanently on the map, for locals and visitors alike. Through his telling of Gjirokastra’s history, the author often takes us on a journey from the middle ages to modern times.

Today, the city lives between history and modernity and is famous for being one of Albania’s UNESCO World Heritage Sites. Built on excessively steep terrain, this city defied the cliffs and slopes on which it stands from its very inception. Here is where the lives and fates of some of Albania’s most famous families were built. Their beautiful, traditional houses testify to their remaining legacies.

The traditional houses of Gjirokastra are known for their impeccable designs, beautiful decorations, warmth, hospitality and natural lighting. Indeed, without sunlight, the medieval stone-city would have cast a long shadow on the lives of its residents. The latter, on the contrary, was quite vibrant. It is precisely this city’s hard-to-describe, distinct atmosphere and appearance that filled so many of Kadare’s pages.

On firm foundations on a steep mountain slope, stands the Zekate House built nearly 300 years ago. This grandiose house is made up of two identical, symmetrical constructions, connected to each other by a balcony, partly hidden by the large roof. The walls of the main room are adorned in beautiful frescoes, while the ceilings are carved in wood and the chimneys intricately decorated. The moon-shaped windows with multi-colored glass were initially imported from Venice, which testifies to the historic connection between Gjirokastra and the world beyond. Two grand arches, as tall as the entire house, create a mysterious juxtaposition and a fascinating sight for visitors.

Right beside the Ethnographic Museum you will find the House of Skënduli family, which has been around for more than 250 years. Exceptionally well-preserved, the tall building stands on traditional stone foundations that reach the height of the first-floor windows. The interior is impeccably designed and illuminated and the house boasts a total of nine fireplaces and elegant ornate ceilings. The entire three-story house is traversed by a grand staircase which highlights the house’s unique construction pattern. 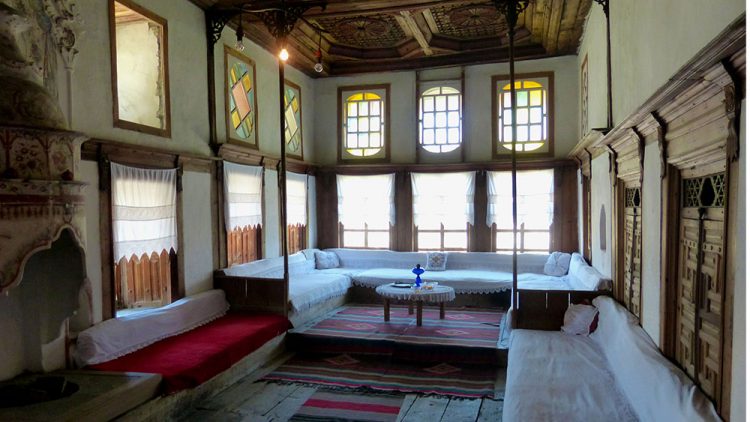 The early stages of the family’s modernization in Gjirokastra can be traced in the Babameto house, an impressive architectural structure, built in the 19th century. The building, constructed over old ruins, joins two houses under the same roof, thus preparing the grounds for the division of greater family units into the modern, smaller ones. Two inscriptions belonging to 1885 and 1887, corresponding to the construction period of the house, can be seen above the entrance. The upper floor seems to slide onto the house’s foundations, supported by sloping structures which remain invisible from the front. Two separate yards, divided by a row of plants and greenery, lead to the house. 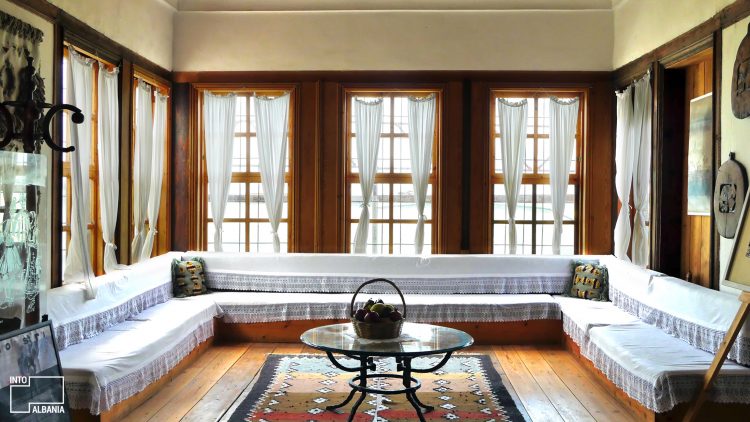 As you look outside from the windows of the Angonate house, the city’s largest house, you might feel as though you are seated in a box seat at the theatre. The residence is characterized by a symmetrical, seven-roofed construction. The Angonati could see the Bazaar of Gjirokastra and indeed, the entire city, granting them and the visitors the privilege of leisurely observing the unusual gathering of stone that is Gjirokastra. The sloping relief of the city has not prevented locals from including fully decorated guest rooms alongside living rooms in their houses. These unwritten standards implemented in all of these houses did not take price or effort into account. The house’s surrounding wall extends along the promenade, gradually gaining an imposing height over its neighborhood. 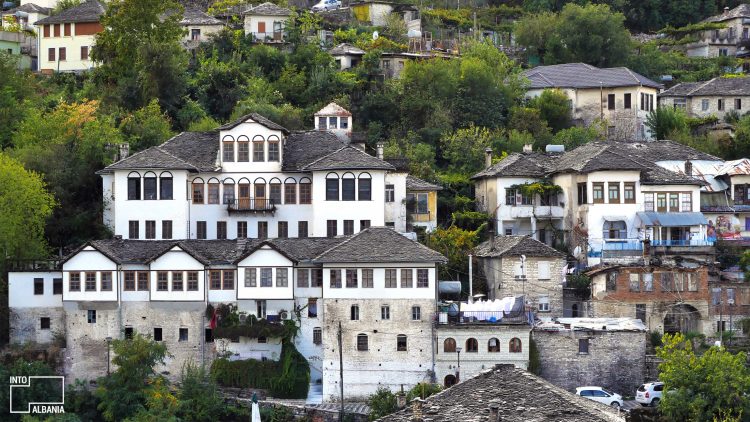 One street away stands the famous childhood home of Enver Hoxha, the former Communist leader of the country for more than fifty years. Built in the 19th century, the three-story building is located in the famed “Palorto” neighborhood. Following its destruction in an accidental fire, the house remained in ruins for several decades until, in 1967, it was rebuilt to become the Museum of the National Liberation War. The reconstruction equipped the house with the characteristics of a typical Gjirokastra home and, in 1991, it was turned into an Ethnographic Museum. Hoxha lived only a few years of his life in this house, but his name seems to imbue this house with a certain grandeur and mystery. 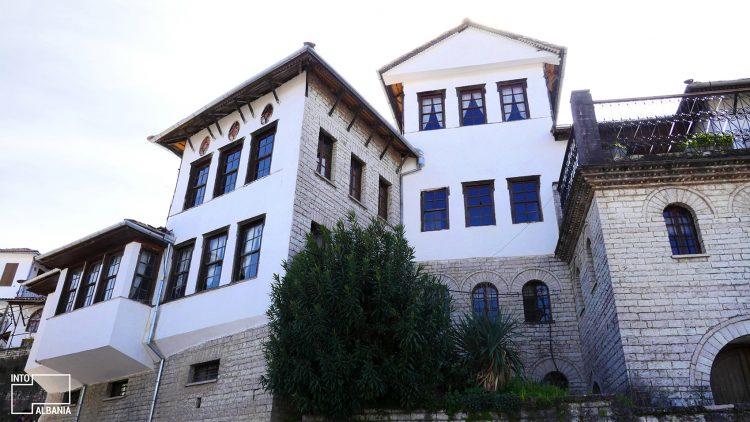 As you continue your journey, don’t be surprised if you suddenly find yourself in the yeard of yet another beautiful house. The Fico residence made quite a splash when its owners painted it bright yellow. Built in 1902, this house exemplifies the evolution of Gjirokastra’s traditional houses. While it follows the traditional construction model, the house introduced a new structure supported by two symmetrical arms, with large windows overlooking the city. The stone-tiled roof flows smoothly over the house, the life of which centers in a small yard that extends unto the neighborhood’s cobbled streets. Three small stone steps separate the door from the main street while the beams of the windows stand like silent guards watching over the neighborhood. 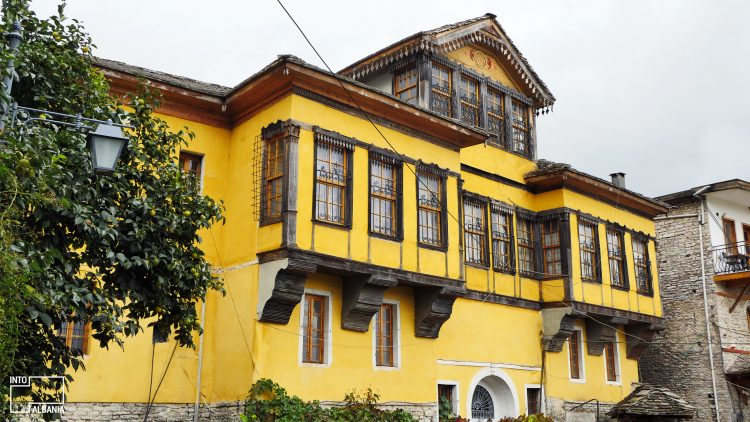 Cultural heritage abounds in Gjirokastra where, in spite of the passage of time, the unique houses of the city prevail. We begin our tour with the house of Ismail Kadare, where stones dominate as the main elements, upon which the foundations of the house are built. Gathered in the guest room, where natural light infuses the atmosphere with clarity and freshness, tourists are introduced with the traditional ornaments of the area. The large fireplace and the recently restored ceiling put the final touches on this house-museum. 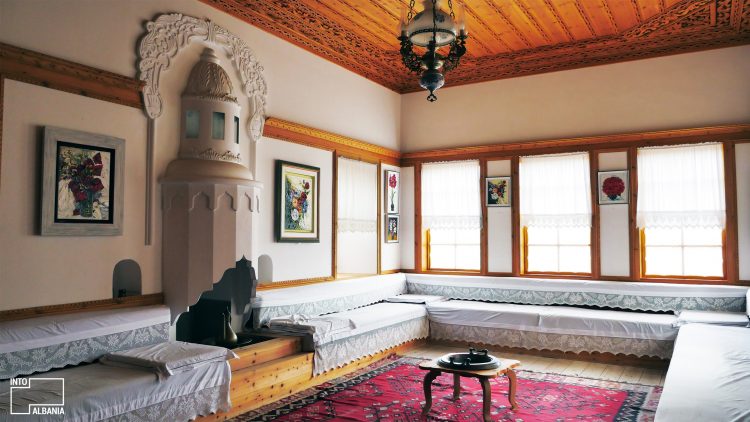