A Guide to Tirana’s Street Monuments - Into Albania

The Ones that Still Stand and Those that have Fallen

The sculptures and monuments strategically placed around the streets of Albania’s capital serve to tell its history in the most natural manner possible: on a walk around the city.

Like most European capitals, Tirana’s monuments tell the city’s most concise history lesson that one can hope to get! Many of the historical monuments were created during the Communist period with the aim of both celebrating the end of the war and inspiring a nationalistic pride among the population. Some, like the gigantic statues of Lenin and Stalin which once lined Tirana’s main boulevard, now hide behind that same boulevard. Take a walk around the city and enjoy learning its fascinating story through its main sculptural monuments.

A historic monument and the capital’s symbol, the Skanderbeg Monument, is also the one that gives Skanderbeg Square its name. Given its importance, the making of this work was entrusted to three of the most renowned names of Albanian sculpture, Odhise Paskali, Janaq Paço e Andrea Mano. Realized in 1957, the monument was inaugurated in 1968 to commemorate the National Hero on the 500th anniversary of his death. Through it, the sculptors tried to convey the full portrait of the military leader and man of state, two important facets of the national hero. Standing proud on his horse, this statue stands for the bravery and victorious spirit of Skanderbeg, the leader who marches confidently towards the certain future. While many things have changed in the capital, the Skanderbeg Monument has represented a stable, focal point and a witness to all of Tirana’s upheavals. 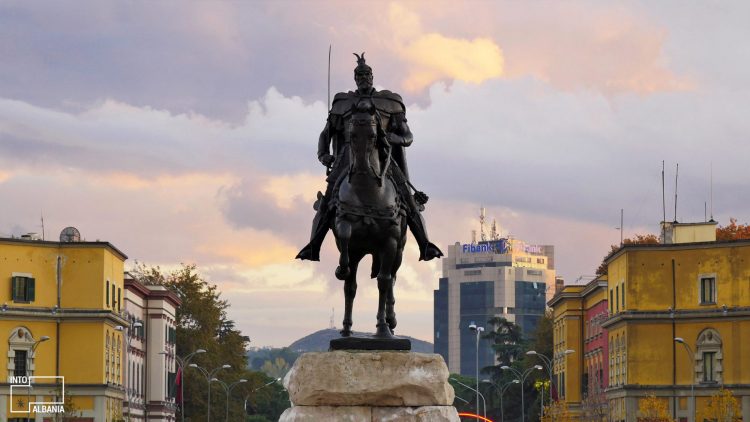 The Skanderbeg Monument in Skanderbeg Square, Tirana. Photo by IntoAlbania.

The “Unkown Soldier,” a monument created by Andrea Mano in 1949, is considered the first work of the post-war period. A strong influence of the author’s Russian education is perhaps visible in the monument’s form. Placed on a pedestal, dressed in his uniform, the soldier is captured in movement, holding his gun in one hand and raising his fist in a decisive gesture of marching towards victory. This monument was dedicated to the fallen heroes of the National Liberation War in Albania. Afterward, many of its features were adopted for the monumental figures of the Socialist Realism movement. Today, the “Unknown Soldier” is located behind the National Library. 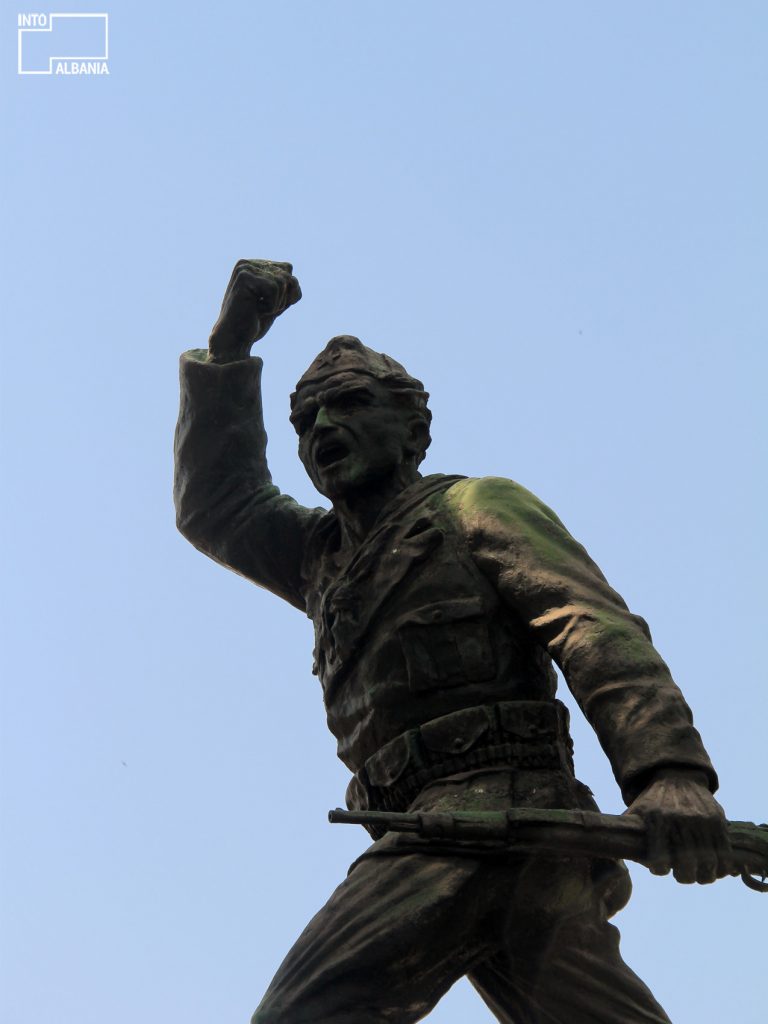 Realized in 1971 by a group of sculptors including Kristaq Rama, Mumtaz Dhrami and Shaban Hadëri, at the time of its completion, this monument was considered a triumph of the historical commemoration genre. Overlooking the cemetery, the 22-meter tall statue commemorates the fallen soldiers of the war. A mother taking care of her fallen sons and daughters, the monument symbolizes Albania’s love for her people but also the new woman, determined and proud, holding a star and a laurel branch, symbols of faith in a new nation. 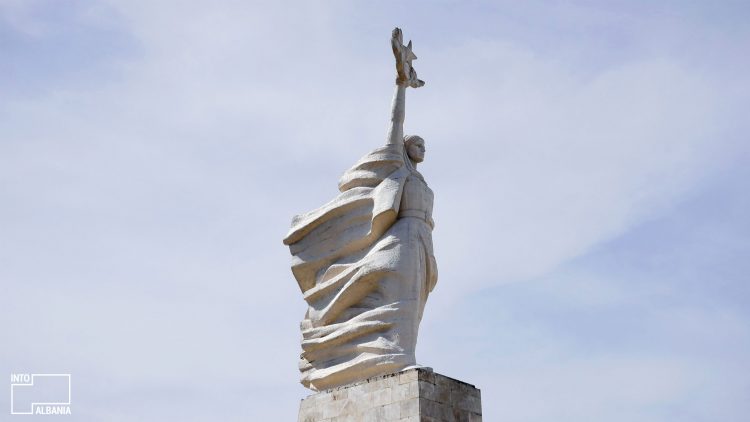 The Lenin and Stalin Monuments

Now all but abandoned, sculptural monuments like that of Lenin or Stalin once graced both sides of capital’s main boulevard, symbolizing the country’s great entrance into its Communist era. These days, you can find these monuments, along with some others from the period, hiding behind the Gallery of Arts in Tirana where they can be viewed (and touched!) by anyone. An interesting fact about the statue of Lenin is that it was made by the very first Albanian sculptress, Kristina Koljaka, educated in the Academy of Arts in Rome. The artistic period following the war was filled with monuments of leaders like Lenin and Stalin. Later on, national leaders began to increasingly occupy the main squares’ central positions. 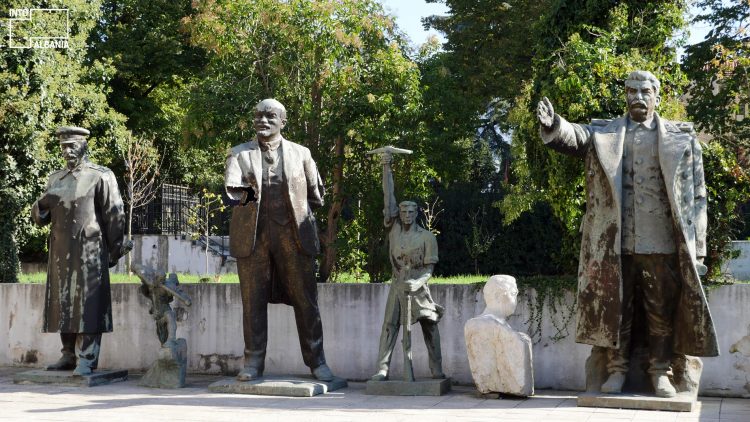 The Lenin and Stalin Monuments behind the National Art Gallery in Tirana. Photo by IntoAlbania.

You can see the iconic bust of Qemal Stafa not too far from the center, in the presidential park located in Abdyl Frashëri Street. The monument was inaugurated on Heroes’ Day, on May 5th, 1949, and is one of the first works by renowned sculptor Janaq Pano. At the time, such monuments were erected as a result of the newly liberated country’s fervent wish to celebrate and commemorate the heroes of the National Liberation War. Today, Qemal Stafa’s bust is one of the most recognized monuments of the capital. 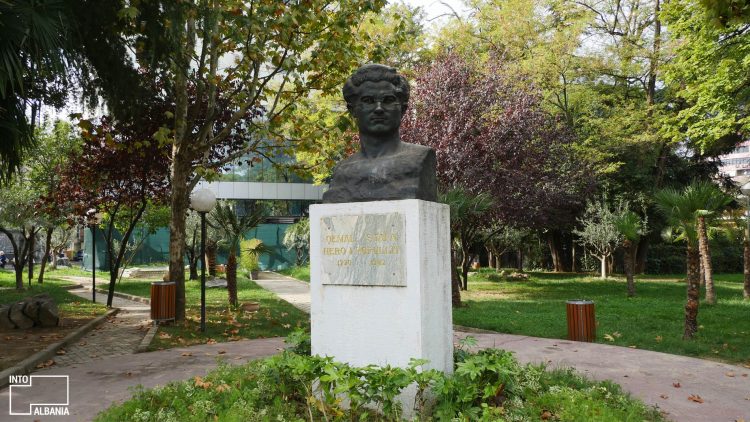 The bas-relief in the residence building of the Prime Minister, created by Kristaq Rama, Shaban Hadëri, Mumtaz Dhrami dhe Hektor Dule, is considered one of the city’s most valuable and beautifully realized art works. Realized in 1974, the work is divided into three panels, dominated by the central one. The latter is composed by three large figures: the builder, the defender and the flag bearer. All three symbols contain notes of a nationalistic ideology. 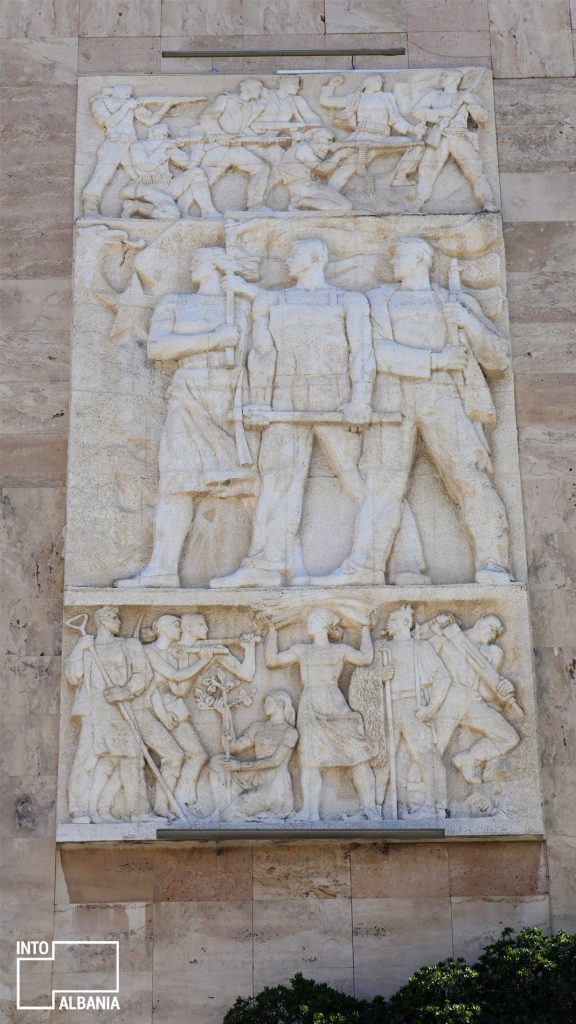 The Prime Minister’s Office Bas-Relief in Tirana. Photo by IntoAlbania.