The Pyramid of Tirana: A Remnant of an Empire That Never Was - Into Albania

Indisputably a symbolic landmark of the capital, the Pyramid of Tirana is a relic portraying a turbulent past and an uncertain yet hopeful future. An opinion splitting landmark described in a myriad of ways ranging from magnificent, ugly or just simply rather bizarre. However, its importance for the city of Tirana has never been brought into question.  It holds the accolade as the most written about architectural structure in the entirety of Albania. The structure’s controversial past has been recorded by Atlas Obscura and the New York Times, to name but a few, although countless words could be written about its cultural and historical significance for Albania. A significance not too dissimilar to that of the Eiffel Tower or the Statue of Liberty. 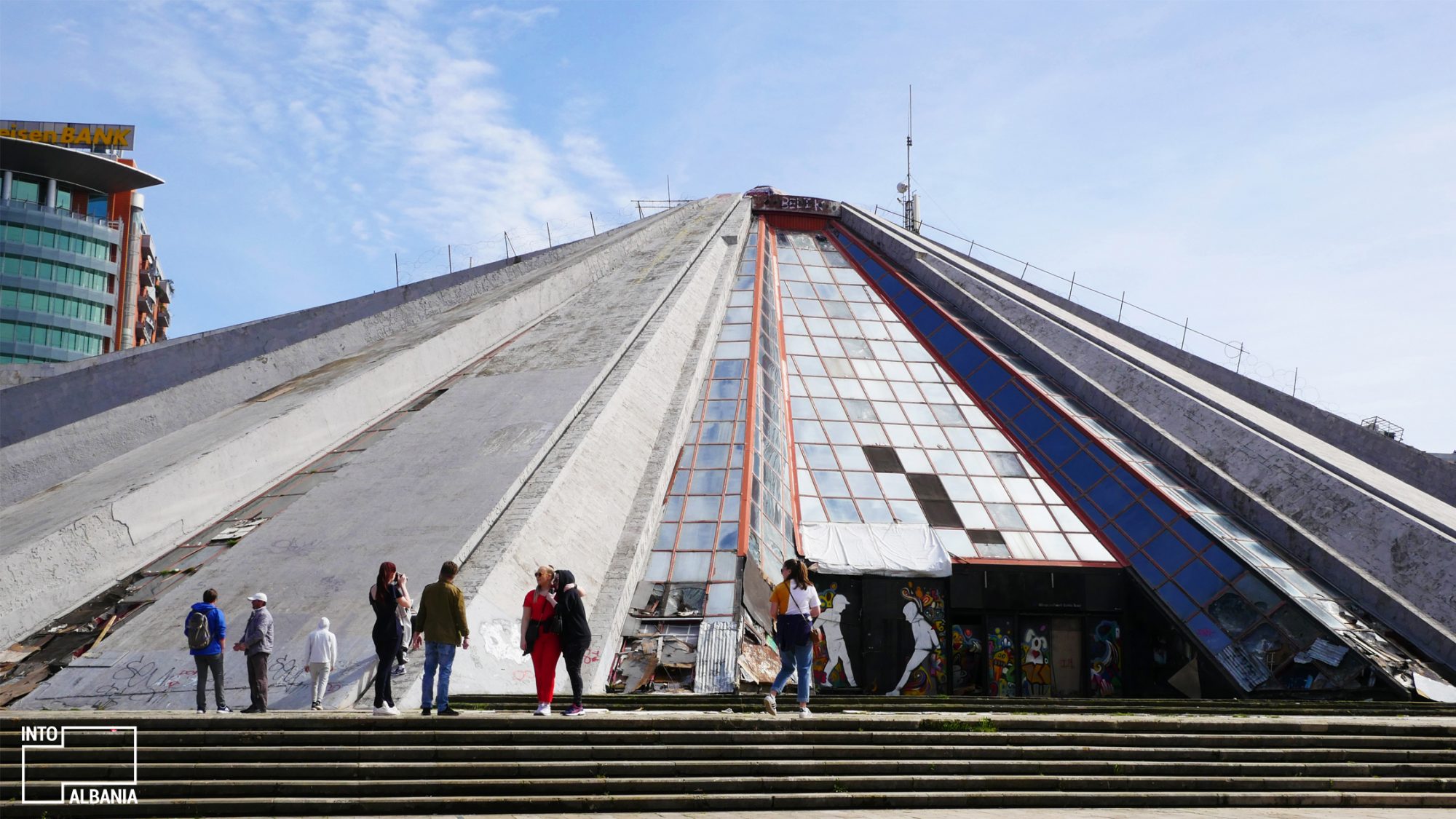 Pyramid of Tirana, photo by IntoAlbania

In the years following Communism, another fate beckoned for the Pyramid, as it was destined to be demolished. Alas, it still stands on the main boulevard of the city but in quite a sorry state. Perhaps the primary reason for its resilience is that it bore witness to the most tumultuous years of Albania’s history and yet it remains a cultural monument whose disappearance would signal more of a loss than a gain for Tirana and the country. 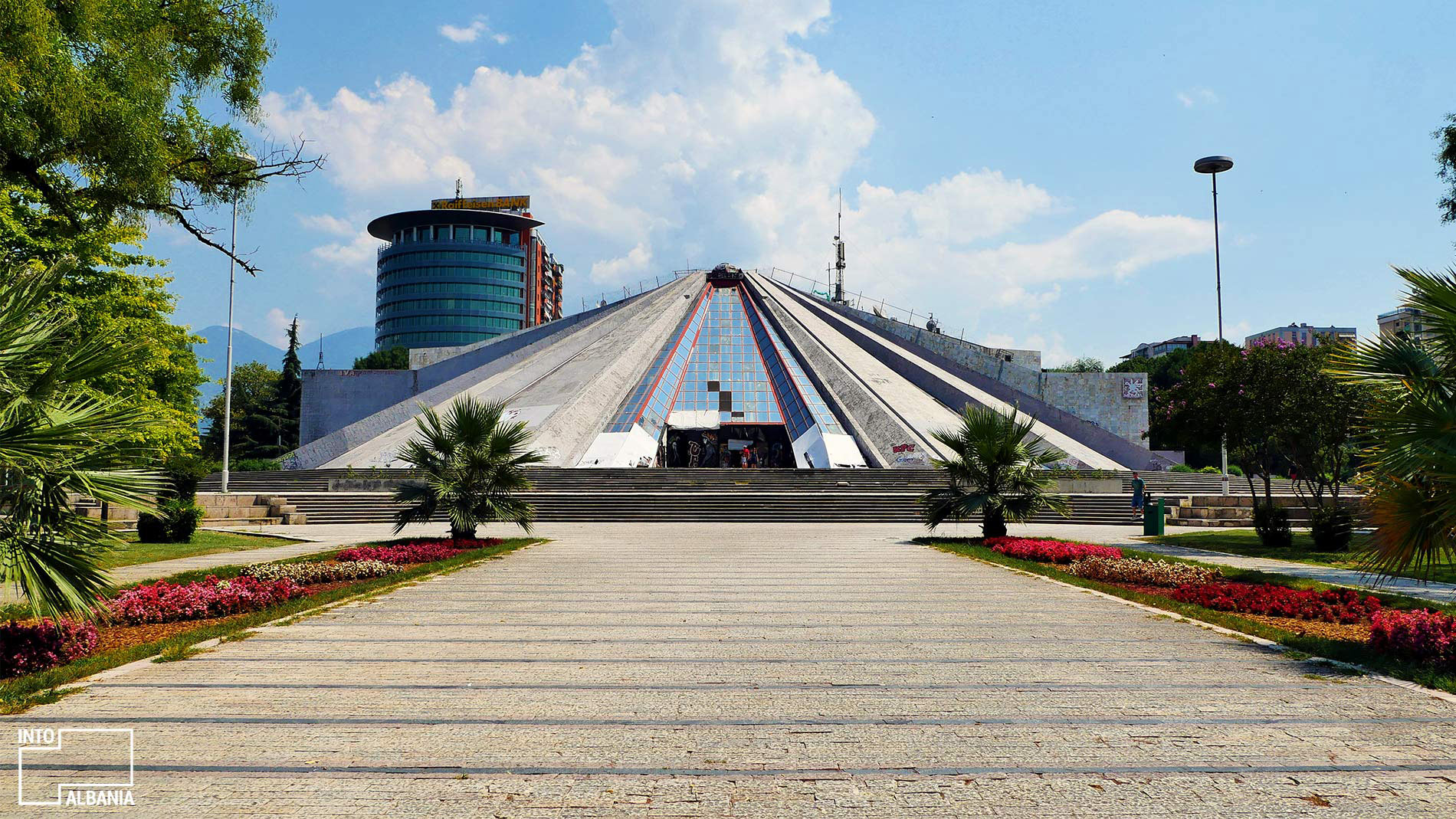 Currently, the Pyramid and its dilapidated interior but somewhat freshly painted exterior serves as a fitting industrial space for art exhibitions and concerts. Although it was originally intended to be a museum for Enver Hoxha, Albania’s Communist leader during the period of 1944-1985. The construction is not solely monumental, but one whose flexibility has been tested by time. The Pyramid has somehow remained au courant and architecturally-speaking the Pyramid represents the first successful attempt at modern design and construction in the country. Quite the avant-garde object at the time of its construction, the Pyramid was the brainchild of a team including four Albanian architects, Hoxha’s daughter Pranvera Hoxha, her husband Klement Kolaneci, Pirro Vaso and Vladimir Bregu. 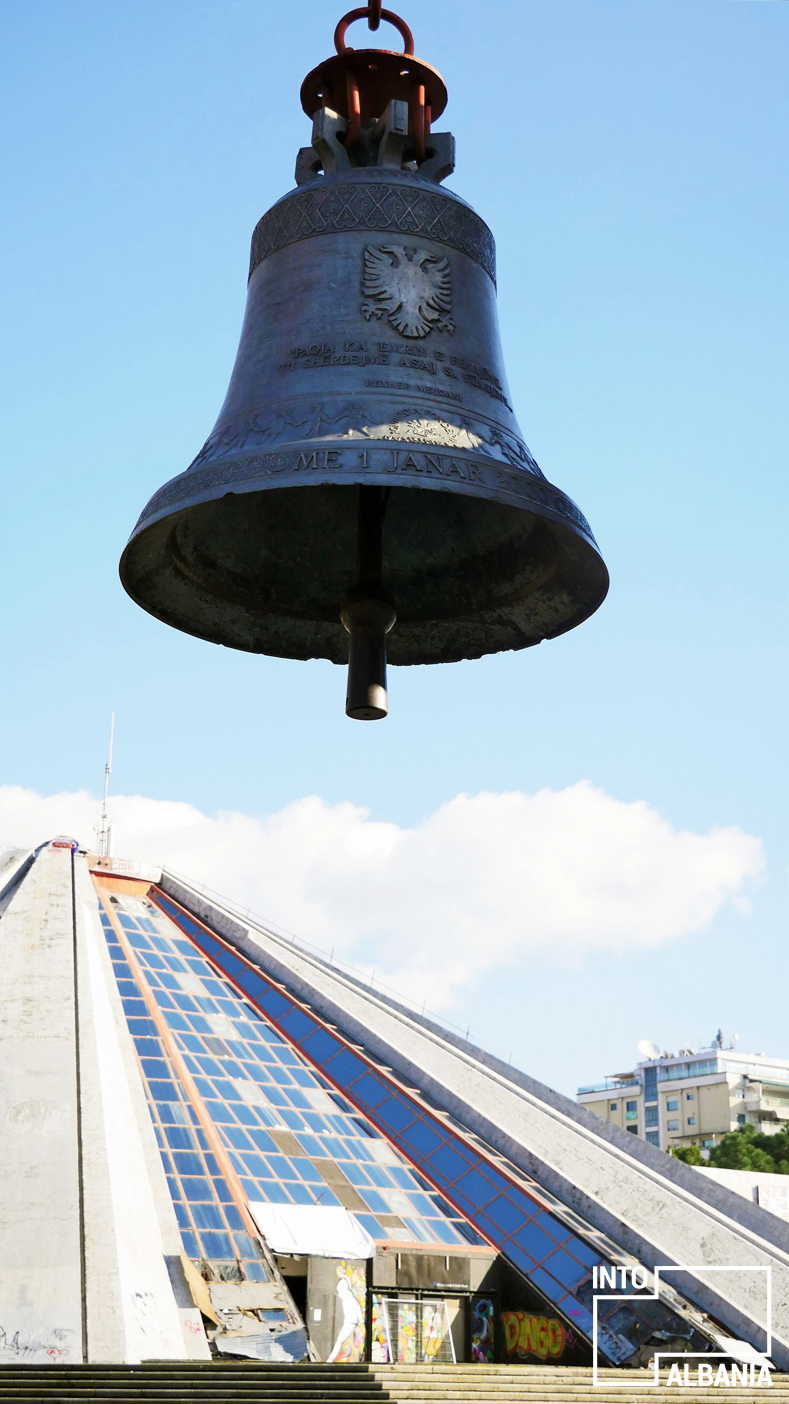 Bell of Peace at the Pyramid of Tirana, photo by IntoAlbania

From planning to construction, the project took a mere three years to complete. The architects took liberties which, during Hoxha’s strict regime, would have been unheard of. One of which was the use of “capitalist” materials imported from the United States. The material was used to attach marble tiles on the façade, tiles that were unfortunately removed during the tumultuous period of 1996-1997. Originally, the Pyramid was topped by a red star, the infamous Communist symbol, which has also now been removed. The Pyramid’s interior was once quite luxurious and multi-functional. The building’s interior floors were designed as mezzanines on different levels, creating an amphitheatre-esque look. The following images, taken from the Pyramid architects’ private collection, reveal the construction in its original state.

The original Pyramid from an aerial view. 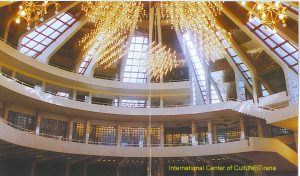 The interior of the original Pyramid. 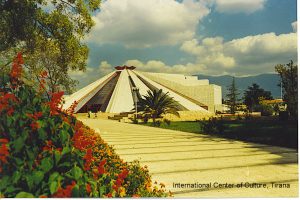 The exterior of the original Pyramid. 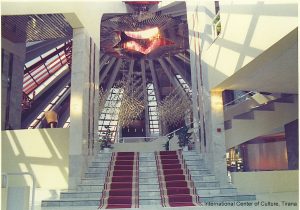 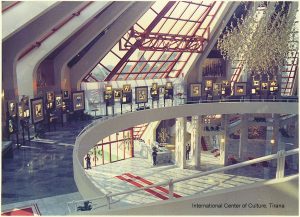 The most surprising fact about the Pyramid is that the name “pyramid” is actually a misnomer as when carefully inspected, the construction reveals an intricate design, with multiple unexpected facades from all viewpoints. The pyramid-like shape can only be seen from the front, while the back is predominantly vertical. You can see the Albanian national symbol from a bird’s, or eagle-eye view which, as you might know, is a double-headed eagle, the inescapable emblem that also dons the country’s flag. The construction was built to stand the test of time and to harmoniously coexist with the landscape surrounding it. The frontal pyramid was meant to seamlessly blend with Mount Dajti which resides at the back of the structure and on both sides. The Pyramid had to co-exist with other iconic buildings of the capital including Hotel Dajti (currently under renovation) and the Prime Minister’s office. 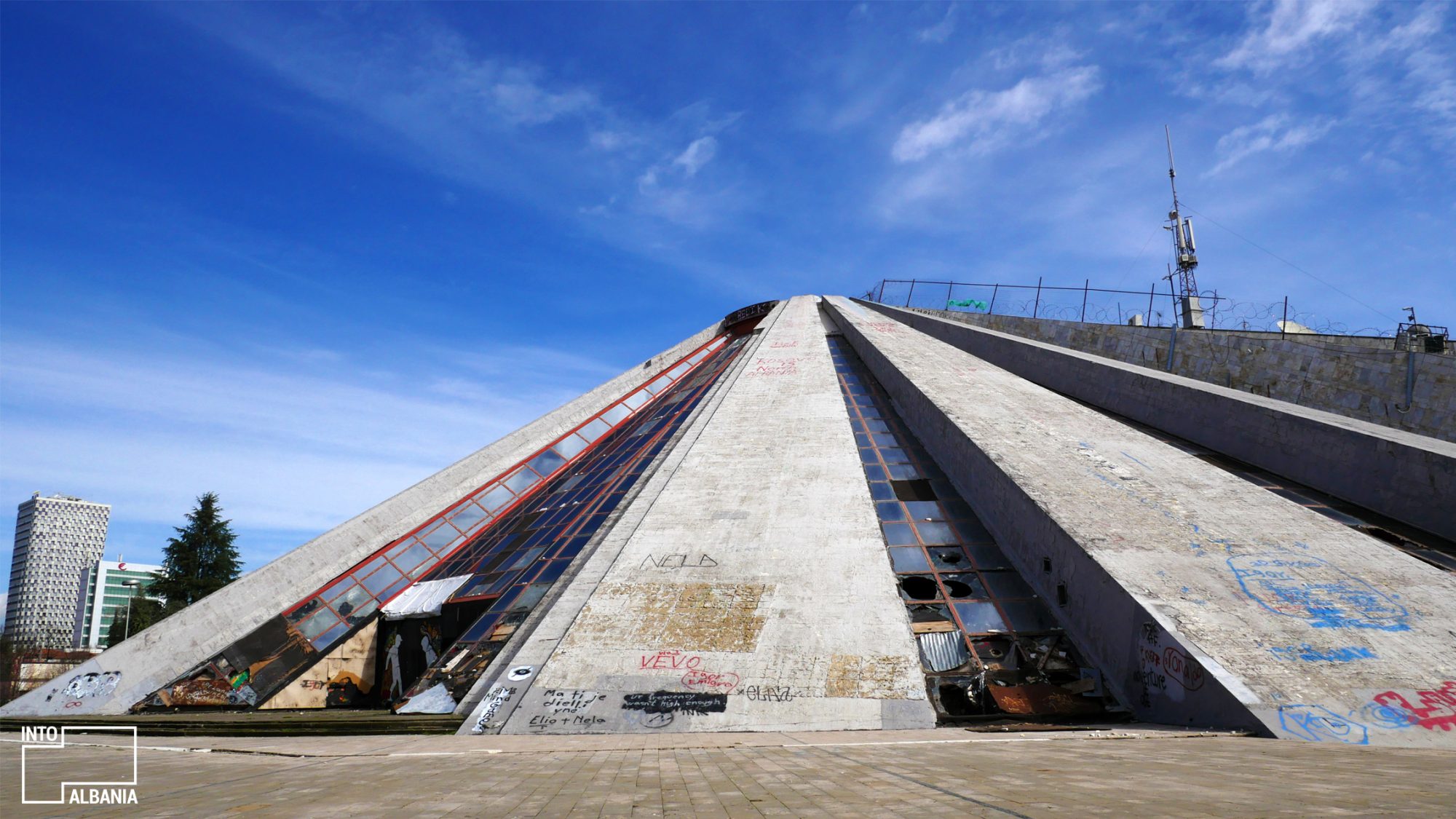 Pyramid of Tirana, photo by IntoAlbania

The Pyramid initially opened as a museum in 1988, exactly three years after the death of Enver Hoxha, as a posthumous dedication to him. Communism fell shortly after and the Pyramid faced radical changes to its purpose and role in the city of Tirana. Its once-beautiful white marble edifice and reflective surfaces became a mirror to the condition of the city, and perhaps the entire country and neighbouring area. During the last few years of Communism, the steps that lead to the Pyramid and the surrounding green area were used as a social spot by the city’s youth who would take the evening stroll, aptly named xhiro, along the boulevard. In 1991 however, the building became a conference center and its social role slowly faded away. In 1999, the Pyramid took on more of a humanitarian function as NATO set up their headquarters for the duration of the war in Kosovo. In 2001, the primary TV channel (TOP Channel) set up temporary headquarters inside the Pyramid. The Pyramid has played host to nightclubs and cafes, countless protests and public gatherings. 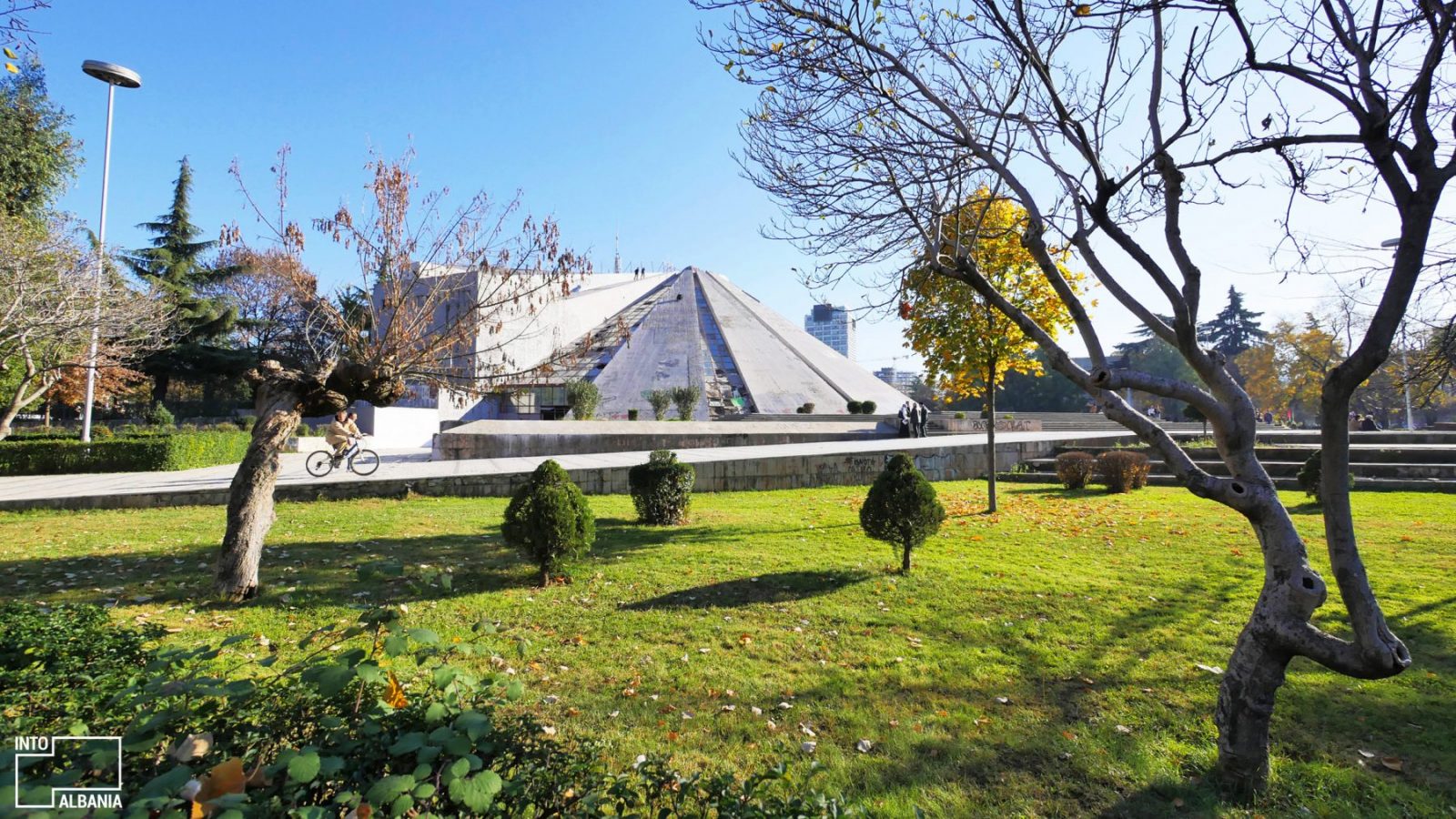 Pyramid of Tirana, photo by IntoAlbania.

A trend emerged in the last 20 years or so as some of Tirana’s youth like to throw caution to the wind and use the slanted sides of the structure as a slide! Demolition was scheduled in 2011 but the move was heavily protested and fortunately, or unfortunately for some residents, the structure still stands. A certain melancholy surrounds this opinion-splitting monument, a ruined remnant of an empire that never was. As people walk past the Pyramid on daily commutes to work it is still revered as a representation of a history not to be ignored or forgotten. And you too will face its remarkable story and poignant presence during your stay in Tirana, it truly is a must-see in the city.